The creative trader stays ahead of the crowd. Many traders are conformists. They look toward the masses for confirmation of their decisions. If the crowd is buying, they buy. If the crowd is selling, they sell. But winning traders are more flexible. They can do the opposite of the crowd when they need to. They listen to their intuition and allow their own perceptions to guide them. The ability to create and devise new trading strategies is a related talent that separates winning traders from everyone else who trades the markets. It’s useful to understand the creative process, and learn how to raise your creative potential. 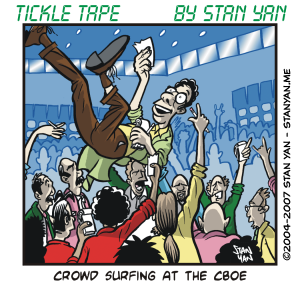 Why are some people more creative than others? There are many theories, but psychologist Carl Rogers proposed one of the most influential. Rogers pointed out that many people grow up in a climate where they feel threatened. They feel so psychologically unsafe that they are afraid to express their own ideas. Their parents were extremely controlling, and believed that unless their children lived up to their expectations, they did not deserve their full respect. There was an implicit message that “unless you do what I say, I won’t fully love you.”

Creative people, in contrast, feel so safe and free that they have no difficulty exploring new ideas and beliefs. They seek out new experiences freely and live by their own internal standards. Research studies back up Carl Rogers’ claims. For example, in a seminal study by Drs. Harrington, Block, and Block, children’s social environments were studied in childhood, and creative potential was assessed when the children reached adolescence. Creative adolescents grew up with parents who respected their child’s opinions and encouraged them to express these opinions.

These findings illustrate that our past childhood experiences may influence our ability to think creatively. People who had controlling and overly critical parents are afraid to express their own feelings and ideas as adults. They are afraid to think flexibly, look inward, and go their own way. If you grew up in such an environment, you may have trouble thinking creatively. Do you have trouble following your own hunches? Are you secretly afraid that you will be punished if you make a mistake? Do you feel you must receive confirmation from others before making important decisions? If you answered, “yes” to any of these questions, you may have grown up in a childhood environment that didn’t foster creative thinking.

It’s important to think about ways you may prevent yourself from thinking freely or openly. It’s vital to acknowledge how past childhood experiences with parents and other significant adults may still influence your ability to think freely and flexibly. You may have been taught that you must seek approval from authority figures (although no such authorities exist when it comes to trading), and that you can’t trust your own perceptions of how you see the world. You may also be afraid that you may “do something wrong” and receive harsh punishment.

You may have developed such beliefs from the relationships you had with your parents as a child. As an adult, however, it’s useful to remind yourself that your parents aren’t next to you watching your every move. You can trust your own opinions. You can act independently and the only person’s opinion that really matters is your own. You don’t need to seek out the approval of others. Indeed, there is no one to seek approval from.

If you want to be an independent-minded, creative trader, it’s essential that you identify beliefs and attitudes that hold you back. You may have learned to limit yourself because of childhood experiences. Identify the beliefs that prevent you from thinking creatively, and you’ll find you can more easily think of new and profitable trading ideas. Once you release your creative potential, you will reach new heights as a profitable trader.