In the mid-1980s, Steve Wozniak, the creator of the Apple II computer, was asked about the future of computing. Interestingly, in hindsight, he said he thought people were making too much of the home, or personal, computer. He said that many simple tasks, such as organizing one’s recipes, are better left to an old-fashioned card file, rather than using a complex computer program. He made his point by recalling an incident that happened when he returned to college to earn his BSEE degree. 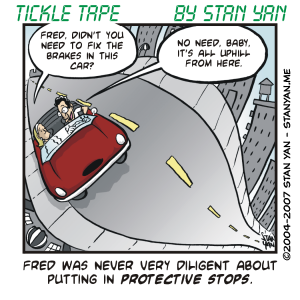 He took along an Apple II, but he spent more time using it to do tasks that he could have done more easily with a less complex method. Now, Steve didn’t anticipate the widespread popularity of the Internet, and computers these days can do tasks more easily than those of even a decade ago. But there’s a solid lesson in this anecdote: Sometimes complexity is a distraction and it’s much better to keep things simple.

In these modern times, we seem to be drawn to technology and to the complexity it may bring. But is technology and complexity always better? For example, do we really need to store our appointments and address book on a PDA? Is it really more efficient? When it comes to trading, technology has indeed helped. Real-time charts are useful for analysis, and it’s vital to have summary data of current market conditions immediately available. But seasoned traders warn not to get too wrapped up in all the complexity. Many seasoned traders note that one can just look at price and volume and make huge profits in the markets, which is quite the opposite of what one might think after having read popular trading magazines touting overly complex indicators.

For anyone who aced introductory statistics in college, some of the “statistical” indicators presented in trading books and magazines seem unnecessarily complicated. It’s as if someone went out and made up complicated formulae to impress people who equate complexity with innovation. There are numerous examples of common indicators that summarize basic market information, yet seem unnecessarily complex, but let’s look at how even a seemingly simple indicator should be examined in even more basic terms.

Take the simple moving average, for example. What is an average, or mean? What does it do? It does nothing more than describe the “centre” of a distribution. The first lesson a statistics professor teaches is that the mean is only a good measure of central tendency when there are no outliers or extreme scores. An extreme score biases the mean. In other words, if there is a big price spike anywhere in the series of prices that go into the average, it will bias the estimate. The lesson: Remember what a mean is, and thus a moving average, and keep in mind that it is doing nothing more than summarizing a series of prices.

Also keep in mind that under certain conditions, the mean is a fallible measure of central tendency. Thus, when you look at a moving average, always look at the basic information that went into its calculation. Remember to move to the chart at a higher timeframe to see the actual time points that were used to calculate that average. Don’t get overly wrapped up in all the complexity. The point is that when looking at any statistic, such as a simple moving average, it’s important to remember that it is doing nothing more than summarizing basic price information. Don’t think that a statistical indicator does something magical.

With all the complex indicators out there, it’s easy to believe, however, that some indicators are magic. But all any indicator does is describe a series of numbers. It is useful to remember a basic data analytic principle: Look at the original values that went into calculating the summary statistic. Don’t focus only on the summary statistic itself. And also remember that complex isn’t always better. Many times it is useful to keep things simple.