As evolved as we want to think humans are, there are times when people can act as mindless as a herd of cattle. It may not be all the time, but there are times when you wonder if people are thinking at all. Ever watch people board an aeroplane, for example? Everyone is just trying to push their way through the aisle, put their carryon bag in the overhead compartments, and get to their seats. No one is thinking originally. What about those drivers during the rush hour commute? Many aren’t thinking about anyone but themselves. 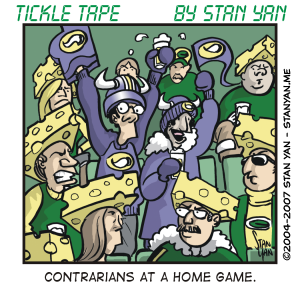 They just try to get to work as fast as possible, cutting people off and doing whatever it takes to reach their objectives. Many people approach trading the same way: They look for the quickest way to make a profit and think it’s as easy as boarding a plane or driving to work in the morning, but it isn’t that easy, especially if you want to make huge profits

Some people argue that trading is easy. They argue, “All you have to do is find an analyst who has a good feel for the market and follow his or her advice.” And you can check with others too, right? If everyone else is buying, they can’t be wrong. Sometimes trading can actually be that easy. There are times when you can buy a hot stock early and just wait for the profits to roll in. A simple buy-and-hold strategy would work just fine. You merely wait for the price to go higher and higher and sell. Sure, it will work, but it all depends on a host of market forces coming together. It will happen occasionally, but these days, if you count on it, you may realize profits once in a while, but you won’t make nearly as much profit as by trading more creatively and independently.

The only way to make the buy-and-hold strategy actually work is to buy early enough to allow the price to rise high enough to make a profit. What usually happens, however, is that one waits too long for confirmation from the masses, and thus, misses most of the price increase. When one gets in too late, the price doesn’t usually rise very far. Instead, one ends up selling while the masses are selling, missing profit objectives. Rather than follow the crowd, it’s necessary to trade like an individualist.

Most people look for direction from the crowd when they trade. They mindlessly try to look for confirmation and feel safe when they follow what everyone else is doing. They try to make it easy, but you can’t make many profits by trying to trade the easy way. You have to do a little more thinking. Why does a stock price go up? Sometimes, the media hypes up stock, the masses are persuaded, and they buy. The price rises, but not always. And why does the price go down? The media can be wrong, and wiser heads prevail. When they do, there is a big sell-off. It’s like a stampede to sell.

If you don’t sell before the stampede, you will get trampled. There’s no sure way to sell early, though. Everyone wants to buy at a bottom and sell near the top, but there’s no surefire way to predict these critical points (sure, technical analysts claim they have indicators and signals that will make such forecasts, but they are not foolproof). In the end, you have to go with your gut instinct. You have to look inward and make decisions on what you think is right. Don’t expect certainty. You can never find a completely safe, foolproof strategy. There is always some risk involved. You may lose money, but to make money creatively, you must be willing to take some risk.