Tim asks, “So how much money are you making?” His friend James timidly replies, “I’m doing all right.” Tim boasts, “Wow, I’m making so much money today. This market is so easy, right?” Tim is not only bragging about how well he is doing, but he is taunting James. He’s trying to intimidate him, and get him off of his game. Some traders are not only interested in trading for the money, but for the competition, and the enjoyment of basking in the glory of success. The competitive spirit can bring out the best in some traders, but for those who are not rugged individualists with rock-solid self-confidence, such taunting can shake one’s confidence. 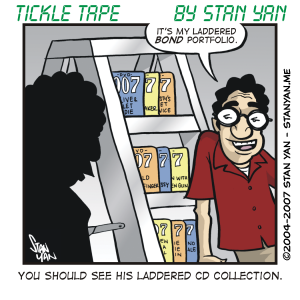 One may feel a need to compare oneself to others, and beat them at their own game, which often distracts rather than motivates. It’s more useful to compare your current performance to your past performance. When you hear that someone is doing better than you, it’s natural to wonder whether you are doing something wrong. But, in fact, you may be doing nothing wrong. Another trader’s apparent success may be an exaggeration, an outright lie, or just a run of good luck. So it’s wise to look only at your own personal internal standards, and not be thrown off by goading comments meant as subtle digs.

Traders, new or experienced, who have not yet developed a sturdy sense of self-confidence or control over their emotions, are easily dissuaded by subtle put-downs. They may question and abandon their trading plans, or trade impulsively to make some big wins to build up ammunition to fire back at the instigator. Seasoned traders, in contrast, filter out goading comments. They expect them, and since they deeply trust their skills and abilities, they don’t care what others think or say. But novice traders, or experienced traders with wavering self-confidence, can’t ignore these jabs so easily.

Isolating oneself from other traders is a possible line of defense but it is not without flaws. It’s difficult to trade by oneself, especially when you’re a novice. A social support network can be crucial. Members of the social support network can provide advice, serve as mentors, or provide emotional support. Ideally, everyone should provide support and want nothing more than success for all. But some people just don’t know how to be supportive, and can even be exploitive, using you to fulfill their own personal needs to feel superior.

For example, they may relish in your losses, making them feel like winners. Or they may need you to share their frustration and pain. They may try to taunt you and disrupt you from winning so that you’ll feel as poorly about your trading as they do about theirs. Others are just plain overly competitive, and feel pleasure in taunting their competition, like when a football team scores a touchdown and tries to secure their winning momentum by psyching out the opposition. On a trading desk, or when talking with fellow traders, such goading is more subtle. Nonetheless, it is still imperative to decipher the underlying motive and see the put-down for what it is.

It’s difficult to cope with subtle attacks on your self-confidence, and perhaps the only way you can fully cope is to develop a strong sense of self-confidence so that no matter what anyone says, you will not falter. But until then, be on the lookout for those traders who are trying to build themselves up by putting you down. It’s often hard to escape them. They are usually loud, obnoxious, and very matter-of-fact in their outlook on the market. Could these traders actually be making the thousands upon thousands they claim? Some may, but it’s unlikely. What they aren’t telling you is how much they have lost. Indeed, they veil their losses by bragging about their wins.

Slowly but surely, however, they stop showing up altogether as their trading account all but evaporates. It’s poetic justice. Nevertheless, don’t let these blowhards stop you from succeeding. When you hear others trying to put you down, and trying to throw you off, realize it’s not about you. It’s about them trying to deal with their own personal conflicts. Ignore it. Pay attention to what you are doing. Look inward for a sense of validation, and you will be one of the select few who trades profitably and consistently.