Jim and Sam, two part-time online investors, are discussing the performance of their stock portfolios at lunch. Jim inquires, “How well did you do last year?” Sam with assurance declares, “I made a return of 20%.” Jim replies sceptically, “That’s a little hard to believe. Are you sure?” Sam says, “I can prove it. I’ve got the records on my laptop.” To Sam’s dismay, a close examination reveals that he has overestimated his performance. He actually made only 15%. His estimate was off by about 5%, which is typical when investors are asked to recall their performance record from memory. 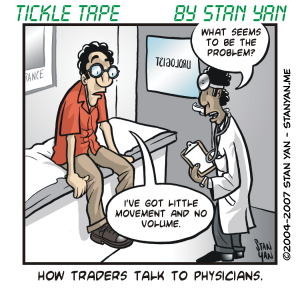 It’s hard to defeat strong ego defences. We all want to believe that we are top performers, and unless our record is right in front of us, it’s easy to let our ego bias and distort our recollections, all in an effort to bolster our self-worth. When asked to estimate how well we will do on a task, we tend to optimistically think we will do better than we actually do. And when asked to recall how well we have done in the past, we tend to remember only the good trades, while forgetting the bad.

Overall, our performance is seen through rose-coloured glasses, which may be a little inaccurate. This pervasive bias is nicely illustrated in a study by behavioural finance researchers Drs. William Goetzmann and Navav Peles of Yale University. They asked a sample of investors to recall their return on investment for the previous year. On average, investors recalled an investment performance that was about 6% higher than their actual returns. This study shows how with no information but one’s memory, people tend to distort their estimates upward.

These overly optimistic estimates are easily explained by psychological dynamics. All people, including investors and traders, want to believe they made the right decisions. It’s hard to admit that one has made a mistake. Rather than change the self-view of themselves as “good investors,” they unconsciously elevate their performance levels to be logically consistent with their positive view of themselves. This type of memory bias is something that all investors and traders should work to prevent. The solution is quite simple, and common among seasoned traders: Keep a scrupulously accurate record of all your trades, the amount you lost, the amount you won, and your overall balance. By regularly calculating objective measures of performance, you will be less likely to rely on your memory, which tends to be biased.

Seasoned traders aren’t afraid to look at their objective performance records. They know that the key to survival is to quickly identify what is going wrong with one’s trading plans and to fix it as soon as possible. Don’t rely on your biased memory for an objective account. It’s wise to keep careful records and have your actual record right in front of you so that you know where you stand at the end of each trading day. Don’t let psychological defences get the better of you. Keep an objective record of your trades at the forefront.