In trading, timing is everything. Winning traders are patient. They know how to control their impulses so as to act decisively at the opportune moment. Rather than acting on a whim, they carefully devise a detailed trading plan, in which precise entry and exit strategies are specified, and strictly follow it. Discipline is the key to successful trading. Although discipline can be learned, some people are more disciplined and self-controlled than others. It is useful to determine where you stand on this trait, and if you’re impulsive, developing psychological strategies to compensate for it will allow you to trade profitably. 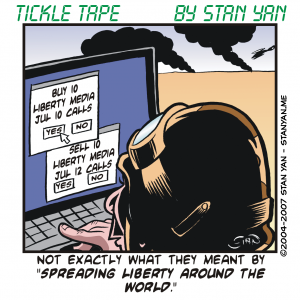 Research studies have demonstrated that some people have difficulty delaying gratification. In the jargon of behavioural economics, they “discount delayed rewards.” That is, they would rather take a small profit now, instead of waiting for a larger profit later. Depending on your style of trading, discounting a delayed reward can be a problem.

For a long-term investor, for example, it is necessary to buy-and-hold long enough for one’s long term strategy to play out. There may be minor fluctuations during the waiting period, but seasoned investors have learned to wait it out. Most novice investors, in contrast, impulsively sell as the masses panic and buy the stock back at a top, which usually results in a losing trade.

If you are a long-term investor, it is necessary to be able to control your impulse to make a profit and allow the price to rise over time. Even shorter-term traders, such as a swing trader, must fight the urge to sell early. Although trades are held for much shorter windows, a swing trader must know how to wait patiently for the optimal time to sell. Selling a winner too early is not going to allow one’s account balance to increase exponentially at an ideal rate.

The scalper is at the opposite end of the spectrum. Most scalpers feel an overpowering need to take a quick profit as soon as they can get it. To some extent, it may be wise for a person who has trouble patiently waiting for the price of an investment instrument to increase to become a scalper.

The conventional wisdom these days, however, is that decimalization has made scalping less viable. It is useful to take other steps to work around one’s inclination to sell prematurely. For example, one can use the automatic settings on one’s trading platform to specify an exit strategy. It has often been said that looking at one’s screen during the trading day is like sitting in front of a slot machine and trying to resist gambling.

It’s hard. Just as the one-armed bandit tempts recreational gamblers, charts and indicators on a computer screen tempt seasoned and novice traders alike to make hasty trading decisions. It may be useful to refrain from constantly looking at how a particular stock or commodity is doing while you’re waiting for your trading plan to play out. If you have to walk away, while having the automatic settings on to manage risk, then, by all means, turn off your screens or walk away.

It is also useful to objectify the trade. The more you can learn to view the trade objectively, as if you just don’t care what happens, the more you’ll be able to resist the temptation to close out a trade prematurely. A cold, rational approach to trading, along with a detailed trading plan, is the best defence against impulsive trading decisions.

Patience is a virtue when attempting to trade profitably. It is useful to remember that humans have a strong, natural tendency to avoid risk and loss at all costs. This tendency often protects us from harm, but there are times when it can compel us to act impulsively. We are naturally inclined to avoid losses at all costs, even if it means selling a potentially winning trade before it reaches fruition. Unless one can let winners increase in price sufficiently, profits won’t balance out losses. The ability to control one’s impulses and wait for larger, delayed rewards is vital for long-term survival. It’s worth developing this ability.