Few things appeal more to our sense of greed than a hot stock-tip. Sometimes it comes in the form of a phone call: “I’ve got a buddy who works for Ajax Widgets,” the tipster will tell you, “and he says the company’s going to announce a huge deal with China next week.” Or you might be playing golf and someone in the foursome mentions that she has just bought 10,000 shares of XYZ Corp. because her broker says some “big news” is due out on the company “any day.” Or a friend of your friend’s lawyer confides that the “ink is dry” on a deal that will seal the acquisition of one corporate biggie by another. 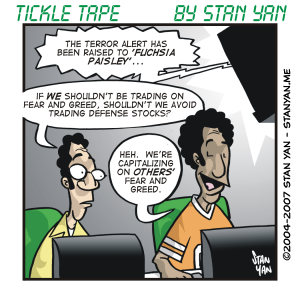 The temptation to act on such tips can be hard to resist, notwithstanding the fact that you could be breaking the law by doing so. Indeed, any tip that proves “hot” enough to act upon is probably illegal, coming from corporate insiders and revealing facts that public investors know nothing about. As we know, acting on such information is insider trading, a felony for which some violators have received large fines or even jail time.

That’s one reason why it’s a good idea to tell the would-be tipster “thanks, but no thanks” when he or she calls. But if the temptation seems too great to resist, there are two other reasons to consider before you take the plunge. First, relatively few hot tips pan out; and second, even when they do, it’s often impossible to accurately predict how the stock will react.

Of course, no one keeps statistics on the percentage of hot tips that worked or didn’t. But if you’re the sort of investor who talks about stocks at cocktail parties, chances are you’ve heard a few hot tips yourself. But ask yourself, how many of them panned out? And how often did the supposed insider news become public within the predicted time span? If your answer to either question was “most of the time,” then you’re probably getting your information from sources that even the CIA would envy.

But for each person who has gotten rich acting on a hot tip, there are probably fifty who have been burned when it failed to materialize. And there are twenty-five more losers who acted on the tip, only to see the stock react in an unexpected way. We’ve all seen stocks fall on ostensibly good earnings news, and rise when the news seemed outright bearish. Take note of these occasions, for they are not so uncommon as you might think. And to be sure, tally up the tips that turned out to be winners, for that’s the best way to build up resistance to the gambling fever that sometimes possesses us when some alleged insider has a secret to share.