Have you ever talked to people who traded stocks in the 1970s? Many say, “I learned my lesson a long time ago. I put my money in the markets and lost it. Never again.” In the 1970s most investors used a buy-and-hold strategy. They searched for “undervalued” stocks, purchased shares, held them, and waited for them to increase in value. Sometimes it worked, but many times it didn’t. 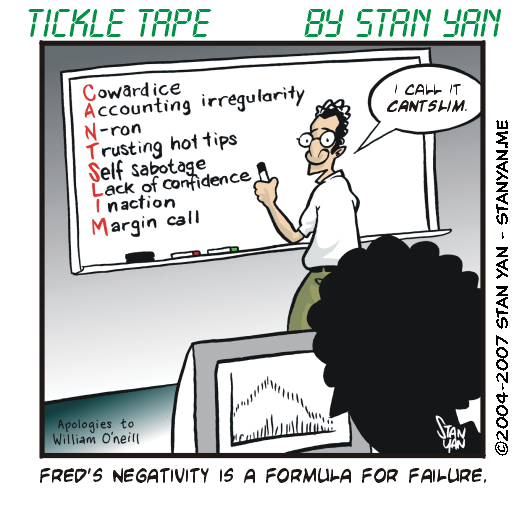 And even when it did work, profits weren’t anything near what an active, short-term professional trader can make. The buy-and-hold strategy often misleads investors.  The markets don’t go in one direction forever, whether the trend is bullish or bearish. Only by anticipating the twists and turns of the market can you make significant profits. If you are striving to become a profitable short-term trader, it is vital that you cast aside the buy-and-hold mindset of the long-term investor, and learn to think like a short-term trader.

Many seasoned investment professionals now admit that stock prices are based on the beliefs of the masses. Assets of a company may play a role in the stock price, but the bulk of the price is influenced by popular opinion. It’s a hard fact of trading to accept, though. If stock prices are based on public opinion, especially in the short-term fluctuations where most profits are made, there’s bound to be uncertainty. And uncertainty and risk are hard to accept.

They try to assess the potential of the company. Will it make profits in the future? Does the company have a lot of good, new ideas that will increase their profits? Although stock prices do reflect these fundamental-based issues, most of the time, we don’t know what the future will hold for a company. This week, for example, the media reported that American car companies are doing poorly compared to Japanese car companies. Who would have known? It’s hard to make these kinds of forecasts.

For example, right after the Daimler-Chrysler merger, the company made profits by selling Mercedes, but more recent profits are from Chrysler sales. It’s hard to say what consumers will do. Again, the profits of many companies are based on the preferences of people, and people’s preferences are far from certain. Without a crystal ball, you just can’t know the future stock price with any amount of certainty, regardless of whether you use fundamental or technical analysis.

It may be hard to accept at first, but short-term trading requires you to accept risk and uncertainty. It may take time and experience to accept, and you may get hurt along the way, but after a little while, you’ll be able to accept uncertainty and thrive on it.