Is being a pessimist all so bad?  Popular inspirational books, such as The Power of Positive Thinking imply that optimism is “good” and pessimism is “bad.”  This view sometimes extends to professional psychology as well.  For example, Dr Martin Seligman argues in his book Learned Optimism that success is associated with optimism.  Optimists are more likely to persist when faced with severe setbacks, while pessimists tend to give up easily, after only a minor setback.

Dr Seligman originally studied clinical depression, a chronic form of pessimism.  It’s his life mission to teach chronic pessimists to be optimists, and that is a noble endeavour.  However, optimism may be a problem for traders, rather than an asset.  Indeed, Dr Terrance Odean, a behavioural finance researcher, argues that traders seem to be too optimistic and too overconfident. 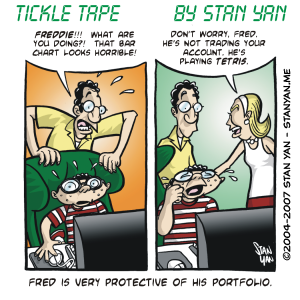 They tend to take risks that they should not, ending up with lower amounts of capital than if they had been a little less optimistic.  This controversy can’t be resolved easily, but let’s consider some scientific evidence that suggests that pessimism is not necessarily a bad thing.

Rosy glow optimists viewed academic tasks as challenging but not especially overwhelming.  Defensive pessimists, in contrast, viewed academic tasks as difficult and as the cause of unpleasant stressful emotions.  They believed that they would not achieve good grades unless they put in a lot of effort.  They underestimated their performance, setting defensively low expectations despite stellar academic performance in previous semesters.  Holding a pessimistic outlook seemed to prevent them from becoming overly confident and straying from their disciplined study schedule.

Throughout the semester, defensive pessimists felt greater stress and anxiety than rosy glow optimists.  Interestingly, this pessimistic outlook was not debilitating.  In fact, among the pessimists, unpleasant emotions were correlated with higher grade point averages at the end of the semester.  But, overall, defensive pessimists did not differ from rosy glow optimists.  That is, pessimism did not have an adverse influence on performance.

Under the right circumstances, and for certain people, pessimism is beneficial.  Considering that several studies in behavioural finance have shown that traders tend to be over-confident, it may be useful to question one’s confidence occasionally.  Ask yourself, “Am I really certain that this trade is going to be successful, or am I taking an unnecessary risk?”  “Have I put in enough time and preparation into this trading plan?” It couldn’t hurt to use a little caution.  Sometimes, a little pessimism is not such a bad thing.