When you put your money on the line, it’s hard to avoid getting a little emotional. Novice traders may be especially prone to experience a roller-coaster ride of emotions, feeling euphoric after a winning streak, yet disappointed after a string of losses. How well do you handle emotions? Winning traders control their emotions. They don’t let their emotions control them. But emotions don’t happen in a vacuum. How emotional you feel depends on the context in which you experience emotions.

Market conditions matter, for example. When the markets seemed to go up in the late 1990s with no end on the horizon, it was easier to stay calm. But after the bubble burst in 2000, many traders learned how hard trading can become. Take the story of a young trader named Dustin. We interviewed him about once a year for three years in 2000, 2001, and 2002. His emotional life changed over time, depending on market conditions and his experience with the markets. 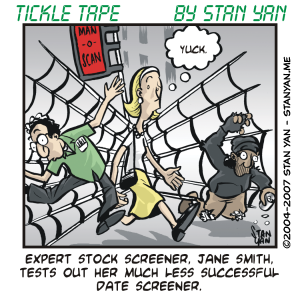 Before the markets changed in 2000, stock prices increased with little resistance. Back then, Dustin saw himself as a relatively unemotional trader. He said, “It takes a lot to shake me up. Even if I do have one of those bad days, it just doesn’t hurt that bad because I know that I’ll probably make it up.” It was easy to stay unemotional back then, but after 2000, things changed.

We asked Dustin about his emotional life a year later after the bubble burst: “The days that I lose a lot are the days that I am too greedy. Maybe I’ll have one bad trade in the morning, then I’ll be down, and it is frustrating. And then I’ll just want to climb my way out. My worst days always start out like that. Then I’ll just dig my hole a little deeper all day long. Those are my worst days. That will usually carry over until at least one more day. By then, though, I realize what I did wrong the day before.

I take smaller positions at first and just try to get myself a little bit in the positive. I’m fine if I just end up making four or five hundred bucks that day because I’m just slowly climbing my way out of the hole I dug the day before. I’m not out to recapture my losses in one day.” With regard to the previous year, Dustin observed, “I get more frustrated than I used to, obviously just because it didn’t use to matter so much when I was making money because I knew that I could make it back.”

Dustin continued to be introspective about his emotions. One year later, in 2002, when the markets were relatively flat, we asked him what he observed. “To make me realize whether or not I was emotional, I had to go through hard times with trading. I think it’s crazy how the market can take you from a high to a low, and back to a high and then back to a low. You think you’ve got it all worked out, and then six months later, you’re thinking of finding a new job. What I realized is that when I’m doing okay, I’m totally unemotional when it comes to trading, like when a new trading strategy has been working.

I just sit there and have a good time. Even if I have a bad trade, it doesn’t bother me. But when I was having trouble, like earlier this year and late last year, when I was only able to keep my head barely above water, it was really frustrating. I guess that’s when you learn more about how emotional you are when it comes to the market.  I’m not the kind of guy who is going to throw my keyboard around, but it definitely has a psychological impact on the rest of my day.”

When asked to summarize his emotional experience, Dustin said, “Obviously, when you’re doing better, it’s much easier to relax and trade. I now see that I can’t say I’m always an unemotional trader. It all depends on how I’m doing. I’ve heard that if you were to see the most successful traders who have been trading for 20 years, you couldn’t tell if they had a good day or a bad day. They are supposedly that unemotional. You read that all the time. But I have a hard time believing it. Let’s see how they would feel after eight months of losses.”