John and Jay are both novice traders, but their approach to trading is markedly different. John is drawn to trading for profits. He fantasizes about achieving great wealth and imagines that when he amasses the riches he desires, he’ll finally receive the respect and recognition from his family and friends that he’s wanted his whole life. He doesn’t dispassionately think that it would be pleasant, but unnecessary, to achieve wealth and respectability; he needs it. He thinks, “If I can only make it as a trader, I can show everyone that I deserve their respect.” In stark contrast, Jay doesn’t care what anyone thinks of him. 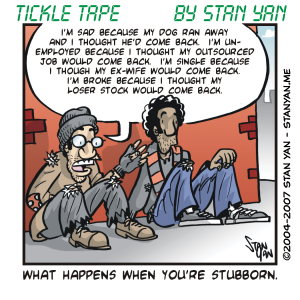 He focuses all his attention on building up his trading skills. He thinks it would be nice to make consistent profits, but he doesn’t feel that he absolutely must obtain great wealth. He enjoys trading for its own sake. It’s fun. He would trade for minimum wage if he needed to. He doesn’t want to do anything else. He feels confident that if he applies himself, and tirelessly works to succeed, he will eventually become a profitable trader. But until then, he enjoys what he’s doing and finds it fulfilling. John and Jay have very different approaches to trading. John is looking for external validation. He cares what others think of him. Jay, in contrast, looks inward for validation. The only opinion that matters to Jay is his own. Jay has a strong sense of inner-worth, and because he lets his own motives and values guide him, he is likely to reach his goal to become a winning trader.

Winning traders don’t let their net worth define their self-worth. They have rock-solid self-confidence. Through a set of critical life experiences, they’ve learned to trust their instincts and let their personal values guide them. They have a clear sense of inner, rather than external, worth. Our website is called “Innerworth” because we know that the single most critical characteristic of winning traders is that they look inward for guidance, rather than outward to the external world for validation. If you want to be a winning trader, you must cultivate a peak performance mindset, and you can’t do that if you’re concerned with what others think of you, or if you’re trying to consciously or unconsciously please anyone but yourself.

It may seem ironic, but the traders who end up as winners aren’t concerned with wealth, glory, fame, or seeking the respect of others. It’s not about the money in the end. In the final analysis, profitable trading is about developing a set of skills that allow the trader to move into a higher level of existence, an experience that is fulfilling in and of itself. An experience that is both engaging and challenging. An experience where one tries to reach greater levels of accomplishment, but at the same time, always looks inward to his or her own personal standards. It’s only about the trader’s personal viewpoint, the markets, and nothing else.

Do you look inward for your own validation, or are you concerned with impressing others, and proving to them that you are superior? When you allow other people to define what you should be doing, you pay a big price: You allow your personal worth, your self-esteem, to be defined by someone else, the external world. And when that happens, you’ll eventually burn out as a trader and join the legions of others who have been drawn to trading but fail in the long run. So always remember, all that matters is what you think. Do what you want to do. If you can look inward for validation, you’ll be a member of the elite group who is winning traders.