Trading isn’t a profession where the top performers follow the crowd. In some professions, it’s vital to be able to astutely identify what everyone else is doing and follow them. But traders must often anticipate what the masses are doing, and they often need to do the opposite. Going against the status quo isn’t easy, however. It takes guts, courage, and confidence. It’s hard to take a risk when there’s a good chance that the path one chooses may lead to a devastating blow. Winning traders are independent and confident, however, and it’s vital to cultivate these core personality traits. 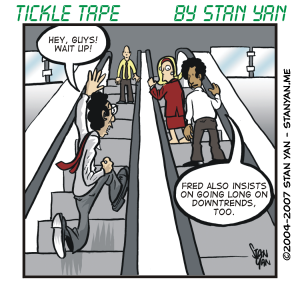 Confidence and independence often go together. Confident people aren’t afraid to go their own way regardless of what others think, while independent people tend to do things their way because they have rock-solid confidence. But some people are confident merely because they have lived their entire lives in a secure, stable environment. It’s like living in the proverbial small town, like Mayberry, N. C., and feeling comfortable in safe and familiar surroundings, but not knowing how to survive in a big city where uncertainly lies around every corner. Similarly, some independent people are folks who like to buck the trend just for the sake of breaking rules. They don’t have genuine self-confidence; they just impulsively go against the prevailing trend no matter what it is. When it comes to trading, neither of these approaches is satisfactory.

It’s necessary to have the ability to follow the crowd when it is appropriate and to go against them when it is called for. For example, when the market is trending strongly, it is useful to follow the crowd for a while. At the start of a major market move, the crowd tends to be right, so one might as well follow them. But at a turning point, the crowd is wrong. The winning trader must be able to anticipate the turning point and be ready to sell while everyone is buying before the market changes direction. If one hesitates or waits too long, it will be necessary to sell toward the end of the market move as the momentum starts to dissipate. By then it’s too late to make a profit.

Having the flexibility to follow the crowd when it is advantageous and to go against them with it is not is difficult. One can neither be a conformist who feels safety in numbers nor a deviant who likes to go against prevailing opinion. The winning trader truly thinks independently and trusts his or her own instincts. Cultivating these talents is necessary to achieve lasting profitability. How can it be done? The first step is to assess your own personality. Are you a conformist, rule follower or a deviant, rule breaker? Neither extreme is very adaptive.

It’s useful to know where you stand on the continuum and to realize that you must develop skills characteristic of the other end. Rule followers must learn to deal with uncertainty and risk, for example. Rule breakers, in contrast, must learn discipline and self-restraint. In other words, they must learn how to follow conventional wisdom, when it’s actually right, that is. Second, one must gain a wealth of experience, and over time learn to trade in different market climates, and at different points during the ebb and flow of market prices.

Many traders know how to trade the trend, and that’s a good start. But seasoned traders know how to also anticipate a turning point and capitalize on the masses’ herd mentality, which compels them to stay with the trend even when it is about to change. By gaining self-awareness and extensive trading experience, you can achieve the lasting profitability of a winning trader.