Trading is a demanding profession. If you are a novice trader seeking consistent profitability, you have your work cut out for you. Many people are attracted to trading, but few actually become profitable traders. It takes a special kind of person to pursue trading, the kind of person who takes setbacks in stride and can persist even when all seems hopeless. There are three key strategies the novice traders can use to persist in the face of adversity: (1) Cultivate a fighting spirit, (2) set up an alternative reward system, and (3) focus on the process, not the prize. 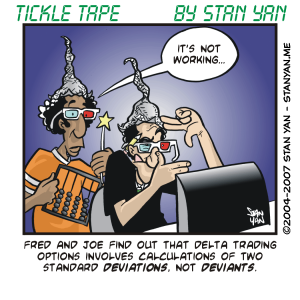 Traders often walk a tightrope between arrogant and unrealistic overconfidence and feelings of incompetence and inadequacy. Trading is a profession where it is realistic to work under the assumption that you’ll see many more losses than wins. It’s hard to work under such conditions. We are used to getting paid for a job well done, but novice traders are likely to put in long hours and the only reward they get is losses. Trading requires persistence, especially during times of disappointment and seemingly endless failures. Most people’s confidence is severely shaken upon meeting such circumstances, and they often react with arrogant overconfidence. They build themselves up to the point where they are unrealistically optimistic. But it is vital to remain realistic, ready to face setbacks head-on and unafraid to look at one’s limitations. By cultivating a fighting spirit, one can look at setbacks as minor, commonplace events and take them in stride.

Although profits are an obvious and natural reward for trading efforts, they are not always tied to the amount of work we put in. If you focus on the profits, it is likely that your mood will rise and fall with your account balance. Setting up an alternative reward schedule will provide more consistent rewards and allow you to persist even when faced with a losing streak. Reward yourself after putting in a fixed amount of time (the end of each day, for example). Buy yourself a nice dinner or do something you find enjoyable. By patting yourself on the back for your efforts, you’ll consistently feel satisfied with your profession and stick with it.

Finally, it is essential to focus on the process, not the prize. Trading is about making money, but the irony is that if you focus on the outcomes of your trades, you’ll put excessive pressure on yourself and choke under it. By focusing on intrinsic, rather than extrinsic, rewards, you’ll feel more comfortable and creative, and trade more profitably in the long run. It may seem counterintuitive, but by focusing on the process of trading, rather than profits, rewarding yourself for effort rather than outcome, and cultivating a fighting spirit, you’ll trade profitably and consistently.