In “The Aviator,” Howard Hughes isn’t afraid to take risks. As a young man, he produced innovative big-budget movies, made groundbreaking business deals, and set new aviation records. With the risks he took, he reaped enormous rewards, but he almost lost it all because he went a little too far. Although risks are a necessary part of trading, it is vital for your long-term survival that you never forget about potential harm, and whether or not you can survive should you lose. 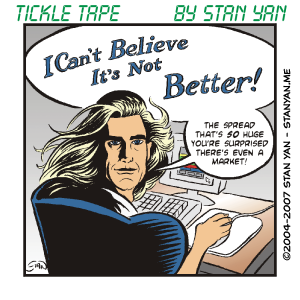 Two interesting scenes in “The Aviator” portray an interesting aspect of risk. In the first scene, Hughes sets a new speed record. He takes his plane to the limit but crashes into a beet field after running out of fuel. He survives to fly again. In the second scene about risk, he tests a new spy plane and ends up crashing into a mansion in Beverly Hills. In this final crash, he ends up addicted to painkillers, which in turn led to his personal, psychological downfall. The crash scene is dramatic, and after watching it, you can’t help but think that there are some disadvantages to taking risks that are a little too big.

Trading is risky. You often hear of famous traders who, today, are out of the business. In the end, you have to find the right balance between taking necessary risks and making adequate profits. You can take small risks and you’ll be profitable. For example, you can carefully pick out stocks in companies that will always make a profit and use a buy-and-hold strategy to make steady returns.

However, if you want to make the big profits of a short-term trader, you must be willing to take greater risks. And as a master trader will tell you, making greater profits often requires pushing yourself to the limits when you have the opportunity to really take home the profits. There are times when everything clicks. You read the markets clearly, and you see how you can make some very profitable trades. At these times, you need to take advantage of your run of good luck.

At these times, seasoned traders take bigger risks than usual. They may feel that it is worth taking a bigger risk than usual in order to take advantage of rare trading opportunities that will produce greater than usual profits. For example, if you hear some news that there will be a severe oil shortage tomorrow, and no else, even the media, has the information, it may make sense to capitalize on this information and risk a lot of your capital. The rewards are likely to pay off. But there are no guarantees. Whether you decide to take such a risk depends on your personal risk tolerance.

People differ in their ability to tolerate risk. Some people are fearless; others like to play it safe. It is necessary that you discover the level of risk that you are willing to tolerate, and trade accordingly. Too much risk can lead to a hard fall, but if you are willing to take risks, even when danger lurks around the next corner, you’ll make the big profits that only a select few ever realize.