A widely popular belief in the field of behavioural finance is that investors are “overconfident.” They put on risky trades that don’t pay off, and in the long run, end up with a lower account balance than those who put on fewer trades. The evidence for this supposition comes from a seminal study by finance professors Brad Barber and Terrance Odean. They analyzed account records from a large sample of online investors. 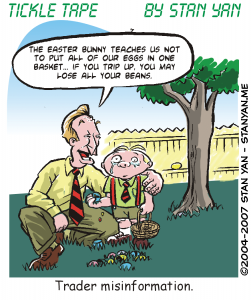 Although this influential study suggests that some investors are “overconfident” compared to others, a psychological measure of overconfidence, or optimism, was not used to assess this trait. A kind of circular reasoning was used to identify those who were overconfident: those who put on more trades were thought to do so because they were “overconfident.” But overconfidence is a personality trait. To show that the tendency to be optimistic and overconfident impacts trading performance, it is necessary to measure it. Science moves forward and sets limits and restrictions on general conclusions. Additional studies are needed to address this issue further.

A study by Dr James Felton and colleagues, in the current issue of the “Journal of Behavioral Finance,” sheds light on this initial finding between overconfidence and trading performance. University students taking a finance class participated in a 13-week simulation. Each participant was given an imaginary $500,000 to invest. There were some real incentives for doing well in the simulation, however. Students could win $500 if ranked in the upper quartile of the simulation, and a portion of their grade was based on their performance. Optimism was measured with a reliable and valid psychological measure.

“Risky” investments were defined as investing in futures and options and as the number of transactions made across the 13 weeks. Men and women did not differ in their levels of optimism, but optimistic men made more risky trades (futures, options, number of transactions) than pessimistic men, pessimistic women, or optimistic women. In contrast to Barber and Odean’s preliminary study, being more optimistic and making more risky trades didn’t seem to have any negative consequences. The final values of the accounts did not differ between men and women, or between optimists and pessimists. Optimistic men, although making riskier trades, performed the same as everyone else.

So is being an optimistic trader such as a bad thing? The verdict is still out. Additional studies are needed. All the same, it’s probably not a good idea to be optimistic to the point of putting on trades without carefully managing risk, such as limiting the size of a position or using protective stops. But perhaps a moderate amount of optimism and confidence is useful.

Dr. Felton and colleagues point out that pessimists often panic, become fearful, and tenaciously deny they are in a losing trade. A moderate amount of optimism, in contrast, ensures that even in the midst of a losing trade, an optimist may be more likely to seek out information and make an informed decision. So, in the final analysis, it is a little like walking a tightrope between extreme unrealistic optimism and extreme debilitating pessimism. Finding the right balance is the key to trading consistently and profitably.