Have you felt under extreme pressure while putting on a trade, and found that you just couldn’t think straight? You questioned your trading plan, and suddenly, you hesitated at a critical moment during the trade, a time when decisive action was needed. When you get like this, it may be hard to snap out of it. A bad mood has a lot to do with it. When you’re in a bad mood, you’ll be stuck and paralyzed. Your mood impacts your decisiveness. The better your mood, the more earnestly you’ll trade. 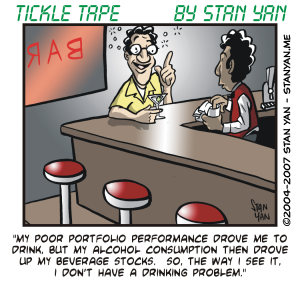 In an innovative experiment, psychologists Benie MacDonald and Graham Davey (2005) showed that seeking extreme perfection is a function of two factors: a bad mood and a belief that mistakes have dire consequences. College students were asked to complete a task that consisted of identifying 100 spelling and punctuation errors. Participants were randomly assigned to one of four experimental groups. Some participants were told that if they made a mistake on the task, they would receive a slight form of punishment, while for others, making a mistake had no consequences. Some people did the task while in a good mood, while others did the task in a bad mood, which was induced experimentally by the researchers.

This experiment explains why people seek out extreme perfectionism while in a bad mood. If you are prone to experience self-doubt, your confidence will be especially shaken when you are in a bad mood. As you try to execute your trading plan, you’ll question whether it is viable or whether current market conditions are optimal. You’ll never be satisfied and think, “Something doesn’t feel quite right.” At these times, it is vital to do one of two things. Either avoid trading while in a bad mood or don’t let your mood guide your actions.

Remind yourself that when you are in a bad mood, you will be especially prone to question your actions, and may act irrationally or impulsively. If you are aware of the psychological mechanisms that influence your decision-making, it’s possible to work around them. If you think, “I’m in a bad mood, and thus, I’m irrationally questioning my trading plan or my abilities,” you can try to ignore your mood, and persistently and logically try to follow your trading plan with discipline. But whatever strategy you take, don’t underestimate the powerful influence your mood has on your thoughts and decisions.