Jack has just lost $1000 on a trade that he thought was a sure winner. He’s frustrated and angry. He thinks, “I want revenge.” In the back of his mind, he wants to get even with someone or something, but he’s not sure with whom he should be angry. He believes he has been treated unfairly. He should have made a profit, but instead, his account balance has taken a hit. It’s reasonable to experience frustration and anger after a loss.

Unfortunately, it is difficult to express your anger when it isn’t always clear who is at fault. Who can you blame? Other market participants? A vague, amorphous sinister image that goes by the name, “The Market”? It may be tempting, but in the end, there isn’t a clear target for your frustration and anger. It’s much more useful to control your anger and frustration. It’s in your best interest to control your vengeful spirit. 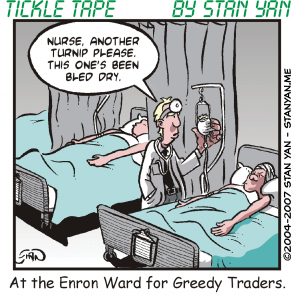 The best way to control a need to get even is to avoid thinking of the market as a person. Don’t personify the market. Stay objective and detached. Anger is an interpersonal emotion. We usually feel angry when we believe that another person has intentionally tried to harm us. If you view the market in an objective and detached way, however, there are no people to be angry with.

Market participants may trade the market, but it doesn’t make sense to view it as an interpersonal setting. The actions of market participants may occasionally interfere with your goals, but their actions are not directed toward you personally. It is more useful to look at the markets as an abstract, impersonal entity, rather than as a collection of people who are intentionally trying to harm you personally.

It’s also important to avoid making inflexible assumptions about market action. You can’t control how the market behaves. You must accept what the market has to offer and live with it, good or bad. Anger is felt when our expectations have been crushed. One expected to profit from a trade, but when the profits were not realized, he or she wanted to seek revenge and get even.

Indeed, in dealing with the market, it’s almost a given that you will lose money, so it is not useful to expect to make money on every trade. Just accept what you can get. It’s hard to admit at times, but the alert trader knows that in all likelihood, one is going to see a lot more losses than wins. If you can accept this fact, you’ll be better able to control your need to seek out revenge.

Trading in a peak performance mindset requires that you control distracting emotions, such as frustration and anger. Anger is not only unpleasant. It eats away at your limited psychological energy and interferes with your ability to stay focused on trading. Don’t let your emotions interfere with your trading decisions. Control feelings of anger and revenge, and you’ll maintain a relaxed and focused perspective that will help you achieve and sustain long-term profitability.