At a family reunion, Jake meets his second cousin for the first time, Ron, an insurance agent. Ron asks Jake, “What do you do for a living?” “I’m a trader,” says Jake proudly. Ron smugly retorts, “There’s no way to make a living as a trader. What do you really do?” The world is full of cynics like Ron. They’ve heard about trading, and perhaps they’ve tried it, but they didn’t achieve financial success, and they don’t know of anyone who has. Understandably, they believe it’s impossible to make money in the markets. Cynics who are limited in their thinking aren’t going to go far in this business. Indeed, trading isn’t easy money. If it were, everyone would be making $1,000 a day. The winning trader doesn’t wonder, “Can it be done?” No. The winning trader assumes it can be done and asks, “How can I learn how to do it?” 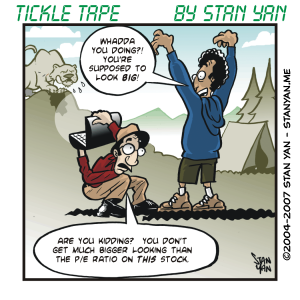 I’m not suggesting that an optimistic attitude by itself is going to turn you into a super-trader. But it is a prerequisite. You have to cultivate a can-do attitude in this business. You have to be willing to sift through the hype and the get-rich-quick trading schemes until you find something that works for you. In the five years that Innerworth has been studying traders, we’ve heard a multitude of stories from people who put all their faith in a trading guru and blew out their account.

The difference between winning traders and the ones who cynically gave up, though, is that the winning traders continued to refine their trading skills. They continued to study the markets with a passion. They continued to read about successful traders in an honest attempt to gain knowledge. They continued to search until they found a solid fit between their personality and a trading style that suited them. And most importantly, they remained open to possibilities. They didn’t hold on to a preconceived notion of how to trade. They realized that markets change and that to be profitable, it’s essential to continually find new trading opportunities, and ways to trade them, in the market to market.

You’ll never know where the next super-trader will come from. A subject of one of our Innerworth case studies was a college student who traded his father’s account. His passion was trading. He read two books about trading every week and worked late into the night trying to identify stocks that might produce a profit. He wrote up detailed trading plans, chatted with other young traders, anything to give him an edge. He taught himself accounting and read through financial reports as if they were thrilling mystery novels. After about two years, he documented a track record of over a 100% profit.

Cynics didn’t believe him. On trading chat rooms, he was accused of exaggerating his performance. When he went to traditional firms on job interviews, he was politely turned down. But did he give up? No. He went to family and friends and asked them to invest in a hedge fund he started? Soon, a few private traders decided to give him a shot and invested too. In his first year of trading his hedge fund, he made a 300% profit. Maybe his success story is an anomaly, but here’s the point: If you allow your beliefs to limit what you can do as a trader, you won’t succeed. You’ll stop searching for new opportunities.

You won’t do the necessary work to become a successful trader. Trading expert Mark Douglas calls this state of affairs, existing in a “reality gap.” You’ll create a gap between what you think you can do and what you actually can do. There are abundant opportunities to make a profit in the markets, but you need to work hard and diligently to find them. It can be done. There are traders out there who make profits day after day. The decision you have to make, however, is whether you want to sit on the sidelines and say, “It couldn’t be done,” or jump in resolute and confident, and work tirelessly until you achieve enduring financial success.