Do you ever dream about winning the lottery? There are actually people who have such good luck that they repeatedly enter contests and win. They win so often that if they wanted, they could count on winning, even though they are essentially trying to capitalize on chance. They develop a “lottery mindset” in that they approach life by counting on rare chance events. The rest of us aren’t so lucky, and we don’t live our lives counting on a fluke like winning the lottery. We work hard, master a profession, and work steadily to make a living. In many ways, top-notch traders approach their profession in the same diligent way. They don’t view trading as recreational gambling and count on a fluke to make a profit. 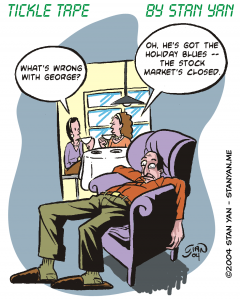 That said, many people do experience key life-changing events. We have all heard of people who needed a lucky break and got it. You often hear of actors who with their last 50 bucks went on an audition and landed a job and ended up as a star of a hit sit-com. You probably know of friends who were desperately searching for a job for months, and needed a job fast! With only a week’s worth of resources left, they found a job.

It can also happen in sports. Olympic athletes may practice their entire life for “one moment in time” when they can perform at their best. But there is some luck involved. A family member may pass away or they may become ill, and it may throw them off their game. Sure, they have rare talents, but the Gold Medal winners are also lucky enough to have everything go their way. There are times when life can come down to a few key moments. It’s a little like playing Lotto and hoping that you’ll win.

Even though profitable traders don’t approach trading as if they are playing the lottery, they all have at least one big winning trade in their careers. In a series of exclusive interviews, we asked traders to describe their biggest winning trades. Jesse described how he invested in Juno Online. “I bought about 3000 shares, and the stock went up 20 points in two days. It went up fast and there was really no reason for it. I had a feeling it was just hype and euphoria, so I sold out and made $60,000.”

Andy described how he used to trade currencies. “One day I was trading Yen, and made around $18,000 in just a day.” Don’s biggest trade was in the heyday of the dot-com boom. “A European auction company was upgraded one morning. It was touted as the next eBay. CNBC was playing it up. The stock had just split and they got the price target a little bit wrong. They quoted an ungodly high amount. This was merely a single-digit stock. That morning it had traded up over 100. I shorted it as it was opening. It opened at 80 or 90 and it ran up to 120. I ended up covering the next day at half of what I shorted it for.”

Do people make huge profits capitalizing on a once in a lifetime trade? Sure they do, but the question you need to ask yourself is, “Do I want to trade hoping to make all my profits on a fluke?” Do you want to approach trading with a lottery mindset? If you do, you’ll always be on edge and you will have difficulty trading with discipline. You’ll tend to take big chances, and you may end up losing big.

It’s better to trade more prudently. That doesn’t mean not taking a risk or pushing yourself to invest a little more capital when you hit upon a winning streak. What it does mean, though, is controlling over-confidence. Don’t seek out those one or two trades a year that will make up for all you’ve lost. There’s an advantage to using a more methodical approach: Continue to search for solid, high probability trade setups, outline detailed trading plans, and trade prudently with unwavering discipline.