As a novice trader, Jack has just put on his tenth trade. He’s still new to trading, but he is optimistic that he will be successful. He wants to succeed. He thinks, “I want to prove that I’m a good trader. I hope I do well on this trade. The outcome is critical to the rest of my trading career.” 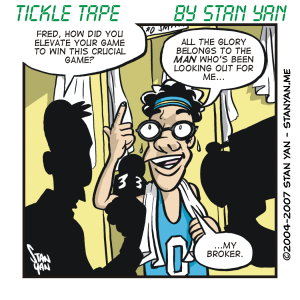 Jack’s thoughts and feelings are understandable. Whenever we start a major endeavor – starting college, a new job, or whatever – we want to succeed. And it’s nice to have early success. The first few moments of a major life turning point seem especially significant. When we aren’t successful immediately, the initial letdown often haunts us for a long time, interrupting our train of thought, and shaking our self-confidence. Despite the reasonable hope of an early triumph, however, it’s vital to keep the proper perspective when approaching trading: one must always think of the big picture, the long run.

Any single trade is of little importance. Experienced traders know this fact and live by it as if it were doctrine. Even though they may focus all their energy on the current trade, they know it is of little real significance in the long run. You should also put each trade in a proper perspective. It is essential that you consider, at least in the back of your mind, that a single trade is just one among a series of trades, and that the bottom line is the overall outcome across the series, not any single outcome.

There are psychological advantages to taking this perspective. When you downplay the outcome of any single trade, it is less critical to your ego. When viewed as just one in a long line of trades, it’s easier to tell yourself, “It doesn’t matter. There will be many more trades and opportunities to come.” If there isn’t much riding on the outcome of a trade, it will free up precious psychological energy. You won’t waste your limited psychological resources needlessly worrying about the outcome. You will feel free and creative, ready for whatever happens next. All your attention will be focused on trading your plan, objectively analyzing how market moves fit into your plan and taking decisive action for a clean exit.

Putting a trade-in proper perspective is not only psychological, however; it also involves proper risk management. To survive the learning curve or a severe drawdown, you must limit your risk on any single trade. By limiting your stake to a small percentage of your trading capital, the trade will have minimal financial significance. In reality, it will be of little consequence compared to your overall account balance. Merely believing that trade is insignificant doesn’t work very well unless, in reality, it is not significant. For example, it’s hard to fool yourself into thinking that trade is insignificant if you have a month’s salary on the line on a single trade, and you can’t afford to lose it. The stress will be unbearable. It’s important for your psychological and financial security that you limit the risk on any single trade. Again, think in terms of the big picture. You don’t need to make money on a single trade; the overall results across a series of trades are all that really matter.

When starting a new endeavor, it’s natural to want to do well on every single attempt. All of one’s hopes and dreams may be placed on a few key trades, for example. But trading is much too difficult to think you can quickly make a few trades and be set for life, with all your aspirations met. The successful trader is in the game for the long haul. The trading lore is replete with stories of traders who made huge profits only to lose it all later. You may see some big trades in your career, which will provide numerous war stories that you can use to entertain your friends for hours, but when going into a trade, it’s vital to keep the trade in proper perspective. It’s still just one trade of the many you will make in your career.