When you have a psychological conflict, it’s in your best interest to resolve it as soon as possible. As an old saying goes, when you ignore a conflict, “it’s just one more thing in the back of your mind, taking up space and time.” Freud said it 100 years ago and contemporary cognitive psychologists have proved it: there are limits to the psychological energy the mind can expand. The more issues you leave unresolved, the more these issues build-up “in the back of your mind” and the less psychological energy you have to address them.  When built up and left unresolved, there’s a high probability that these conflicts will creep out when you least expect it. Not everyone has unresolved conflicts that sneak out of the unconscious and influence his or her trading behavior, but it’s wise to make sure that you are free of psychological conflicts. 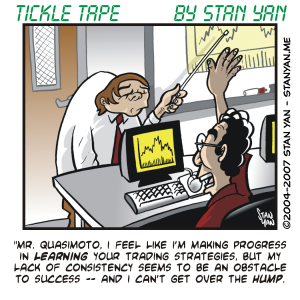 Do you have unresolved conflicts that lie in the back of your mind? Studies have shown that it’s difficult to push these conflicts out of consciousness and pretend that they do not exist. Ironically, the more you try to deny the existence of these conflicts, the more limited psychological energy you waste.  Rather than trying to ignore conflicts, it’s better to acknowledge and face them head-on. Most of the time, the mere acknowledgment of your conflicts will produce a quick resolution.

Even if you are not the kind of person who has a lot of past conflicts to resolve, there are some conflicts that all traders must face at one time or another. There are many beliefs about trading that hold some validity but are hard to accept. For example, novice traders must acknowledge and address the possibility that a series of winning trades may be due to a run of good luck, rather than trading skill. It’s better to acknowledge this possibility than pretend it has no basis whatsoever. Remember, it takes more psychological energy to pretend that you have trading skills you don’t have to admit that you need more practice and instruction.  By admitting your potential limitations, you can spend your limited psychological energy more fruitfully by refining your skills to become a top-notch trader.

There are similar beliefs that some traders may be afraid to acknowledge but should.  For example, a trader may think, “Perhaps I was a good trader at one time, but the market conditions have changed and I may not be able to keep up my reputation as a successful trader.” All traders face this possibility at one time or another. It may be valid or it may not. But regardless of the validity, allowing such a belief to lie in the back of one’s mind takes up psychological energy. It’s better to acknowledge the possibility, and if it is false, remind yourself that it is absurd, or if it is true, take the necessary steps (such as learning new trading strategies) to prove it wrong.

Many beliefs always lie at the back of your mind and when you feel in a dumpy, disappointed mood, these beliefs can move from the back of your mind to the forefront. It’s not useful to ignore them. It’s better to acknowledge them immediately. Once you do, you are more likely to be able to say to yourself, “that may be true, but it is of no consequence right now.” Then, you better spend some time later dealing with it. Conflicts in the back of your mind can have an impact. Make sure that you face your conflicts, spend time examining them, and try to resolve them. If you can do so effectively, you’ll have at least removed one of many things from the back of your mind, and free up psychological energy.