Jack is an engineer turned trader. He was the valedictorian of his college graduating class and was a successful engineer for about a decade until his company was bought out. He decided to pursue trading and enjoys it most of the time, but today, he is angry and frustrated. Things just don’t seem to be going his way, and he can’t understand why. He thinks, “I was a successful engineer. If I merely apply the same approach to trading, I should make profits, but it doesn’t seem to work. What am I doing wrong?” 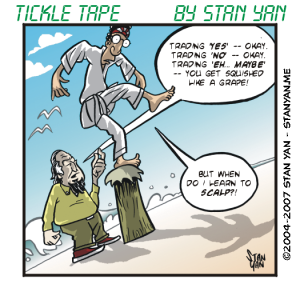 Jack faces a problem familiar to most novice traders who move from a successful professional occupation to trading. He is trying to apply what he has learned as an engineer to trading, and it isn’t paying off in quite the same way. Whether you admit it or not, trading is different from many other professions, and if you pretend it is not, rather than recognize how it is different, you’ll feel disappointed and want to give up. You don’t have to feel discouraged, however. With the right mindset, you’ll feel empowered and ready to master the markets.

Scientists and engineers work in the physical world where everything is usually concrete, quantifiable and predictable. Traders, in contrast, work in the social world. Market participants are humans, and social scientists discovered long ago that people are not predictable. People are influenced by their moods, and their moods waver, easily swayed by events of the day. You never know what people are focusing on during any given moment. They may be distracted and thinking of what they are going to have for dinner rather than paying attention to what really matters.

They may make impulsive decisions rather than those based on logic. But by chance, at other times, they may behave precisely as expected. The social world is not like the physical world. Traders are part of the social world. They aren’t predictable as ocean waves, which are controlled by gravity. They don’t behave according to a magical set of proportions found in nature. They are inherently chaotic, mysterious, and ultimately, unpredictable. So if you try to control, predict, or completely understand people, you will fail. Not recognizing this fact is what leads many novice traders, like Jack, to fail.

In many walks of life, we are taught that responsible people try to anticipate every single event that may go wrong, and compensate for it. We are fortunate that in many occupations, responsible people are in charge. Pilots are careful to follow a flight plan. Surgeons are careful to follow medical procedures precisely to ensure success. And it is wise for traders to trade responsibly by managing risk, delineating a detailed trading plan, and trying to anticipate any adverse events that may thwart their trading plan.

There is a point, however, where what you can do is limited. Since you are not dealing with the physical world, but a human and unpredictable trading world, you cannot assume that you can have the same level of control to which you are accustomed. In the final analysis, you must realize what you can change realistically and what you can plan for, but at the same time, you must be wise enough to realize that you can’t account for everything. There is no such thing as perfect knowledge in the markets or conventional wisdom that is always right. There is always an element of uncertainty and risk, and it is vital that you acknowledge it and accept it.

It is essential that you approach trading with an objective and realistic mindset. It is important to acknowledge that the markets are unpredictable and often chaotic. As much as we try to find meaning and consistency in the chaos, it is wise to remember that we may be wrong and that the markets behave consistently only when they do.

The rest of the time, there’s nothing we can do. Accepting what you can and cannot control can do wonders for your outlook. There’s a sense of freedom that comes with knowing one’s limitations. The more you can accept what the markets can offer you, rather than you trying to unrealistically control the markets, the more profitably you will trade.