Would you ever think of jumping out of an aeroplane without a parachute? Of course not, but that’s what some people do when they trade the markets. They are very willing to put their money on the line, but they don’t have much to protect them from a major disaster. Placing a stop, for example, can prevent you from allowing a small loss to turn into a big one, but many traders avoid placing stops. Why do some traders take risks by not placing stops? It can be difficult to know where to place a stop.

If you fail to account for volatility, you will get stopped out too soon. Other people are afraid to place stops. Placing a stop requires you to consider the worst-case scenario, and to many, it’s difficult to consider failure. It’s easier to deny the potential problem and to pretend it will not possibly happen. Many experts, however, suggest placing stops. They know that nothing is certain when trading the markets. They view protective stops as a kind of insurance policy that prevents them from losing money. 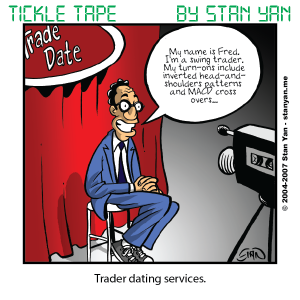 David, a seasoned trader interviewed by our staff, says “I never take a trade without knowing my stop. When I take a trade, I’m pretty convinced it’s something worthwhile. I’ve already figured out my stop. I’ve accepted the (potential) loss before I ever clicked the button or made the call. So if it starts going against me, I don’t feel a flood of emotions.”  For David, stops not only protect him from losses, but they help him control his emotions. Stops give him a feeling of security and allow him to feel calm and relaxed.

Seasoned traders may use stops all the time, but even the most seasoned traders have difficulty following them. Shawn, for example, admits, “I’ve blown stops and it’s painful. The weird thing is that money does not seem to be driving it. Afterwards, I sit and try to analyze the incident. I certainly knew better. I believe trading is something of a self-journey. It involves learning about your character, your self-control, and your ego.”

Dan also admits he blows his stops: “Sure. That happens all the time. There’s nothing I can do about it. That’s one of the challenges that continue to engross me. Do you hold them or do you fold them? If you fold them and the stock price goes up, you get angry because you made a mistake. If you hold them and they go down, you become angry again. Nevertheless, you have to stay focused on what’s going on and learn from the experience and try to apply it to the future. You’re going to take your lumps in the market.”

Even though stops are difficult to set and difficult to keep at times, they are an essential component of risk management. Losses are commonplace in trading. As hard as it is to focus on losses, they are impossible to avoid. Rather than avoid thinking of the worst-case scenario, face it head-on. Figure out what could go wrong and where you can place a stop to protect you from a huge financial loss. In the long run, you’ll find you will limit losses and trade more profitably.