When trading the markets, uncertainty is often a fact of life. Consider the plight of Jack who tried to add as much certainty into his trading as possible. He decided to invest in a solid retailer. Consumer confidence was high and sales had been high at the retail stores for the past two years. He looked closely at the five-year chart and noticed a clear, upward trend. When the price did temporarily drop, the most it had ever fallen in the past five years was about $3. It was currently trading at $40. He decided to buy 2000 shares and protected himself by placing a stop at $37. He reasoned that the past five years would be a good indicator of what might happen in the next year: the stock price should continue to rise and should only fall by $3 at the most. There was something psychologically pleasing about studying the fundamentals of the company and its past stock performance. He felt assured. Even though his risk was almost 8% of his trading capital, he decided the risk was worth taking. 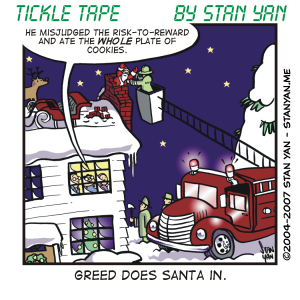 Unfortunately, history only repeats itself when it does. A month after entering the trade, the stock price fell to $35. Jack couldn’t believe what happened. He thought, “How could I have been so wrong? I had considered all the possibilities.” Many novice traders think like Jack. They seek out a level of consistency in the financial markets that just do not exist. They believe that the markets follow natural laws and falsely believe that there are some magical mathematical principles that underlie it all. Big time institutional investors may be able to forecast the market action in the long term, but they have mountains of capital and can attempt to hedge risk, and even they have great difficulty merely matching the yearly increases of the indexes. For the smaller investor or trader, there are no secret mathematical formulae. The past is the past, and what happened in the past may not forecast the future.

Don’t falsely think that you can forecast market action with the same precision a physicist can program a satellite to reach Mars. The markets don’t follow natural laws. There are many unknown factors that underlie the price action. The best you can do is study all the available information and make an educated guess. As long as you manage risk, you can make trade after trade and get the odds to work in your favor. You won’t be right all the time, but you’ll be right enough of the time to make a profit. It may be pleasing to think that you can add certainty to trading, but you can’t. You’ll feel better in the long run and trade more profitably if you accept the fact that the future is uncertain.