The great trader Jesse Livermore blew out his account more than once in his illustrious career. It’s scary to think about, but if you want to become one of the few who reach the top in this business, it’s necessary to face the possibility that you may blow out your account. Many seasoned traders have had to start over more than once. You may not be immune to this ailment. Just like all top-notch traders, you may need to pay your dues and learn what it’s like to lose and come back. 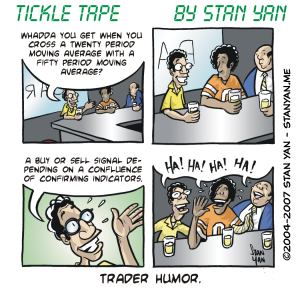 In an interview with Innerworth, Tom, a long time market observer noted, “I have yet to meet a successful trader who hasn’t paid his dues.” Tom observed that every successful trader has blown out his account and learned how to recover from it. “Take the best traders in the world…they’ve blown out. If trading was easy, everyone would be trading and everyone would be making money. You have to pay your dues. Some people are lucky and only pay those dues for a very short period of time, and others are going to pay their dues for a very long time.”

Another seasoned trader, Dan, described how he lost big before making a comeback: “One time I lost virtually everything in one or two days, and a good friend of mine came over to make sure that I wasn’t going to do something stupid. … I told him, ‘It’s only cash. It’s not my life that I lost. I can get it back. It’s not the end of the world. I’m not losing my house, my car, my credit cards, or my friends. I made a mistake. I’m angry that I made a mistake, but the cash has nothing to do with it.”

The trading lore is replete with similar stories. One young, promising trader, for example, lost so much money that his brokerage decided to fund him to make back what he had lost. Even the best traders blow out. Why? For some, it is merely mathematics. They are under-capitalized and end up spending what little earnings they make on a few wrong trades and on commissions. They never had a chance. Other traders are overly impulsive. In a sense, the old adage, “you have to risk money to make money,” is true.

To make big profits and turn a small account into a large one, it is necessary to take big risks when a once-in-a-lifetime trade comes along. That said, you may also be taking a big risk that has dire financial consequences. There’s no one right way to trade. If you want to make it big in the trading business, you may need to take risks. But you should be ready to deal with the consequences. Other traders may want to play it safe by trading small and building up their trading skills and trading capital before scaling up to make those bigger, riskier trades. Whatever you decide, it’s necessary to keep up your spirits on the one hand but be ready to pay your dues on the other. You can make it if you stick with it, but everyone has to put in the required time and effort and learn to pick yourself up after a setback