The entrepreneur, the corporate CEO, and the top-notch trader are all viewed as exemplars of independent thinkers. They go their own way, go against the status quo, and are unyielding individualists. Well, that’s the perception. We’ve addressed this issue of conformity versus independence several times at Innerworth, in weekly assessments, daily columns, and trade doctor questions. To our surprise, this issue always seems to spark controversy. Folks don’t like it when we imply that they are not completely independent, and even slightly conforming. Ironically, some have even contacted us, and argued that they are indeed independent, which seems contradictory, since truly independent people could care less what we think of them. Our reply? There is nothing wrong with being a little bit of a conformist, rather than a firm individualist. 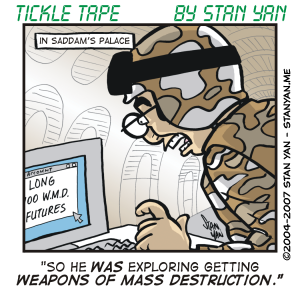 Psychologists have conducted comprehensive research studies of business leaders, and guess what? They are conformists. They have to be. A skilled conformist has an astute sensitivity to social cues, can read social situations accurately, and can easily modify his or her behavior to react to the situation in a manner that puts him or her at an advantage. So there’s nothing wrong with being a little bit of a conformist, so if you’ve been a successful businessperson or other professional, you are probably a conformist relative to the entire continuum of conformity versus independence.

It’s the conformist in you that has made you successful and gotten you ahead, so extol yourself for being an effective and adaptive conformist. Perhaps some people strongly dislike being called conformists because they think that “conformity” means “thoughtless adherence to social norms.” That’s ultra-extreme conformity, overly dependent and probably not very adaptive. Healthy conformity entails social sensitivity and adaptive rule-following. Extreme individualists, in contrast, tend to be loners who don’t care about social rules. The unkempt eccentric artist comes to mind as one exemplar of the extreme individualist. They truly go their own way and don’t care if they have no status, money, power, or friends for that matter. Although this exemplifies the kind of individualism that is conducive to trading, you can see that most successful business people don’t fit into this category, and are more towards the conforming end of the continuum.

True independence is something one must strive to achieve. As a successful person, you have tendencies to look for subtle situational cues to guide you, and universal rules or unfailing signals may not exist in the markets. Looking inward toward your own personal rules and values is something that novice traders must learn to do, and seasoned traders do already. True independence is not the same thing as non-conformity. Just like the ultra-conformist, non-conforming rebels also allow societal norms to overly control their behavior; they merely automatically break the rules rather than automatically follow them.

True individualists, instead, are willing to go against the crowd in effective ways. They don’t break a norm just to do it, but they break a rule because their own personal motives and values tell them that there is a valid, more compelling reason to go their own way. Complete independence means both the abandonment of conforming and non-conforming behavior. The individualist is free to confirm or not conform; they just do what they want. They strive for the optimal balance between complete self-reliance and identification with the broader group and societal norms.

In the end, you’ve got to develop an awareness of how independent and non-conforming you are.  Again, your past success probably means that you are used to being a little bit of a conformist. So be on the lookout for when you are conforming and strive for true independence. Look inward to what you really want to do. When it comes to trading, don’t pay any attention to societal norms or rules. By searching for what you truly want to do in any decision, you will be striving for independence.