Traders and investors have difficulty “letting their profits run.” When you see your investment increase in value, it’s hard to avoid selling early to lock in profits. But not every trade goes your way, so when you come upon a trade that does produce a profit, it’s vital for your long-term success to maximize the profits for that particular trade. You must make more profits on your winning trades than you lose on your losing trades, but this is difficult to do if you consistently sell prematurely.

Waiting for your price objective takes self-control. You must fight the urge to sell early. A study by Professor Kris Kirby at Williams College illustrates the usefulness of a thinking strategy that may help you increase your ability to maintain self-control when you need to (Kirby & Guastello, 2001). Dr Kirby suggests viewing economic decisions as “linked” in that the decisions you make on earlier economic choices influence the decisions you make on later economic choices. 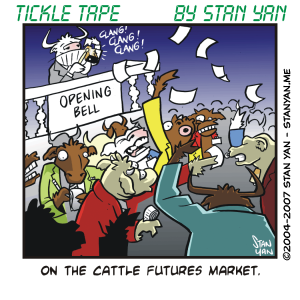 How do you approach to discipline when you trade? Do you think, “I’ll sell early on this trade, but on future trades, I’ll let my profits run.” What’s the harm? It may set a bad precedent. What you do early on may influence what you do later: If you sell early on some trades, you may tend to sell early on other trades. Dr Kirby experimented with a simple thinking strategy. Participants were told to think of a series of decisions as linked together. They were told that initial choices were good predictors of future choices.

Results of the study showed that this simple thinking strategy worked. When people were reminded of the recurring nature of choices, and that they should show self-control early on, they were able to actually show more discipline and self-control when asked to make later economic decisions. These findings suggest that if you want to trade with discipline, it is essential that you maintain discipline at all times. Don’t sell early, and think, “I’ll hold on next time.” The mind doesn’t seem to work that way. You must show self-control early and on all decisions. So when you are about to sell early, stop! Remind yourself that the long term consequence of taking profits prematurely is that it will set a bad precedent. You won’t be able to show self-control and restraint when you really need to. And in the long run, it will severely cut into your overall profits.