Ever see a pattern emerge, and instinctively trust your gut instinct even though your logical mind told you otherwise? Sometimes it works, but other times your intuition may fail you. Scientists are fascinated by how people use intuition. There’s something intriguing and mystical about it. Intuition helps us make quick and rapid decisions without full conscious awareness, but sometimes it’s wrong. 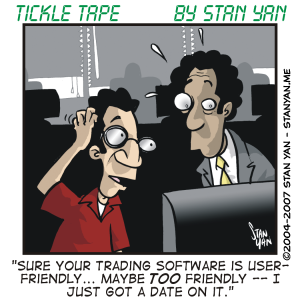 Trading is a matter of probabilities. We find a method that has a statistical edge and use that method over and over so that the law of averages will work in our favor. But there are times when we forget about probabilities and go with our gut instinct. Our intuition is often influenced by emotions. There are times when we want to see something so badly that we see things that aren’t there. A study by psychologists Drs. Denes-Raj and Epstein (1994) illustrates how people can throw logic out the window and make a poor decision when they believe their gut instinct is right.

There’s a lesson to learn from this study: Intuition is powerful, and it’s vital to learn to overcome your intuition when you suspect that it may lead you astray. If you were a participant in the study, would you choose to try the 100-bean jar? Your intuition would drive you to go there, but you could train yourself to curb this tendency. You could tell yourself over and over, “Pick from the 10-bean jar,” and you would probably do it even if you had a nagging urge to pick from the 100-bean jar. You might try the same strategy while trading.

Seasoned traders rely on their intuition to make winning trades by quickly and efficiently capitalize on the market action, but if you’re a novice trader, your intuitive skills are not yet developed. Whether you are trying to identify the emergence of a pattern with technical analysis or trying to read the tape using price and volume, your intuitive skills may lead you astray. Intuitively, you may think the price will move in a particular direction, and your emotions may want it to, but it doesn’t happen. As you gather a wealth of experience, your intuitive skills will develop, but until then, it’s wise to be a little skeptical.

Don’t unnecessarily stand aside or lose confidence. Continue to make trades, but don’t risk too much on a given trade. If you ignore your risk management rules as a novice trader, you’ll take big hits to your account. Your skills are not yet developed, and until they are, managing risk allows you to survive the learning curve. Mastering the markets takes time and experience. Eventually, you’ll develop the intuitive skills to trade quickly and decisively, but until then, stay cautious and disciplined.