Seasoned traders have learned to trust their intuition. Do you? How do you observe the world and gather information about it? Do you just want the facts and the specific details and none of that “touchy-feely” stuff? Or are you more intuitive? Are you skeptical about so-called facts? Do you think the reality is subjective, merely an artificial construction that differs from person to person? Many people haven’t learned to trust their intuition. They prefer cold, hard facts and see the world as rational, predictable, and orderly. Intuitive types are more fanciful, and see the world as random, theoretical, and conceptual. The markets aren’t always logical. It’s useful to learn to trust your intuition. 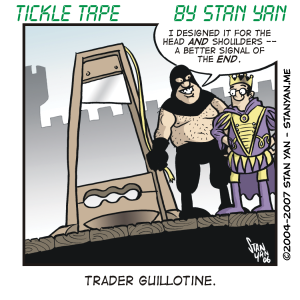 Many novice traders are fact-oriented, and that can be a good thing. Since they have yet to accumulate a vast repository of experience, it is better to stay fact-oriented and concrete for a while. For example, they may want to know the specific price level where resistance begins. Or they may try to search for a specific set of rules to identify precisely where resistance begins. Over time, however, the seasoned trader learns to take a more intuitive approach to trade. An intuitive trader, in contrast, merely views the “rules” to identify resistance as mere guidelines, which may work sometimes but not always.

For example, perhaps resistance will be a round number or a previous peak or trough, perhaps it will not. No one knows for sure; such guidelines are just possibilities, not hard and fast rules. It is useful to avoid looking at market concepts literally, believing they are true-life entities. They are merely abstract concepts. An intuitive trader looks at the markets in a figurative sense. All signals and indicators are subjective in the end, maybe a little inaccurate, and are a mere approximation of reality.

Reading charts and getting a feel for the markets is subjective, and that’s when you must learn to trust your intuition. Trading decisions are merely based on educated guesses. It isn’t exact, but mushy, random, unpredictable, and conceptual. It’s not linear, a matter of fact, and predictable. Novice traders often have difficulty trusting their intuition. They want to find all the specific facts and unfailing rules that can be used to forecast the markets. They tend to think that if the “right” set of signals can be discovered, they can make big profits.

It would be nice if it were that simple but it is not. The markets are so complex and chaotic that it takes intuition, hunches, and a kind of creative and artful mastery to win consistently. The logical analysis of facts and figures can only go so far when you are trying to trade the markets, which have inaccurate figures and are largely inexact.

The difference between the novice and seasoned trader is that the seasoned trader has a wealth of experience. Seasoned traders can scan many aspects of trade simultaneously and automatically. At first, they had to deliberately look for signals and carefully put it all together. But over time, they developed an intuitive feel for putting it all together to make a fast, intuitive judgment. It’s much like driving a car. The student driver must carefully attend to various aspects of driving, but over the years, seasoned drivers can scan many inputs at once and make quick driving decisions. It’s the same with trading.

By making as many trades as possible and in a variety of market conditions, you’ll collect a wealth of experience and hone your intuitive skills. Over time, you’ll be able to make quick, accurate assessments of the market and act decisively. It may not happen overnight, but over time, you’ll develop this skill set. The more experience you gain, the more accurate your intuition, and eventually, you’ll trade effortlessly and profitably.