Hannibal Smith on the “A-Team” was fond of saying, “I like it when a plan comes together.” A couple of weeks ago in this column, we used Apple Computer’s (AAPL) product announcements and earnings report to illustrate the psychology of the masses. It isn’t often clear what the masses will do. Will they listen to the news? Will they ignore it? It’s anyone’s guess, and you don’t really know what will happen until it happens.

But the price of AAPL seems to have corresponded with media hype and analysts’ reports over the past few weeks while the rest of the stocks in the tech sector have been declining. If you guessed that the product announcements and earning report for AAPL would produce a price increase, you would have made a profit in the past few weeks. It’s one of those times when simply riding the wave of mass opinion can make you a profit. 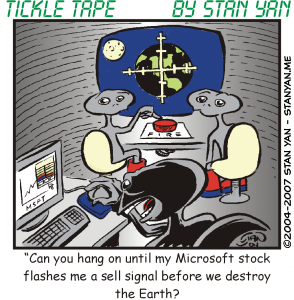 It’s simple, easy, and straightforward. That said, however, it’s still wise to remember that a plan that comes together this week may not come together next week. It’s wise to always stay a little on-guard. Don’t complacently think you can just ride the wave without taking precautions.

AAPL has been steadily increasing in the past 12 months, up from about $20 a share a year ago to close at over $70 on Monday. If you used a buy-and-hold strategy about a year ago, you would have made over a 300% return. If only we all had a crystal ball. Who knew iPods would sell so well? At Macworld Expo, analysts had expected Apple to report sales of 5 million iPods. In the week leading up to the announcement, the price increased from about $65 to $70 based on the media hype. Unfortunately, at Macworld Expo, APPL CEO Steve Jobs reported that iPod sales were 4,580,000, falling short of expectations. What happened? The price dropped as the masses sold. It’s understandable. Expectations of the masses weren’t met, and the price of the stock went down. This illustrates the psychological aspect of trading.

Without some inside information, you couldn’t possibly know how many iPods were sold until Steve Jobs told us. So profiting from the news was a little bit of a gamble. Indeed, despite APPL announcing a slew of new products that many analysts thought would produce profits in the next quarter, the price continued to fall, perhaps because of news of poor performance of other stocks in the tech sector. It goes to show that you can never fully anticipate what will happen on any given day. Will the masses respond exactly how you had planned? What news will drive market participants to sell? What other related news has an impact? If you were betting on an increase at the close, you would have been wrong. The masses sold off when they heard the news of lower than expected iPod sales and other tech sector news.

But buying and selling happen in waves. The next day, the AAPL earnings report beat analysts’ projections. What happened? As expected, the price rose. And despite fluctuations intra-day, AAPL has closed at near $70 most days in the past two weeks, the highest price it has been in several years. Will it continue? Who knows? There are many adverse events that could thwart trading plans. New products may not be delivered on time, for example. World events may strongly influence market decisions. Despite what happens in the future, it’s interesting to see how trading can be simple at times. The price seems to rise and fall like waves, and if you buy and sell at the right time, you can make an easy, tidy profit.

There is an axiom of trading that is difficult to accept: Sometimes the markets work the way you would expect and sometimes they don’t. Most people have a belief that the world works in a highly predictable way. It’s hard to accept that, in reality, life outcomes are uncertain. We never know what really will happen next. What events impact the price of a stock, and how will the masses react? What events did we forget to consider? It’s all just an educated guess in the end. That’s hard for some people to accept. But if you can learn to accept that there is an element of risk in trading and that conventional wisdom is only true when it is, then you’ll profit from the markets.

History only repeats itself when it does, and the masses behave in predictable ways only when they do. It’s a fact. Sometimes you can just follow the masses, but at other times, you need to take a contrary approach. In the end, it’s a matter of accepting uncertainty. You must try your best to make intuitive, educated guesses, take decisive action, and work under the assumption that if you make enough trades, you’ll come out profitably in the long run. Sometimes a plan comes together, sometimes it doesn’t. If you just remember it’s no big deal when it doesn’t, and move on, you’ll be profitable in the long run.