Not to put a damper on your plans for making a significant change in your life, but research studies have shown that people have great difficulty keeping New Year’s resolutions. Here are a few ways you can increase your odds of success, however. First, set a realistic goal. Many people think they can do the impossible. They think they can radically lose weight, for example, without a heroic amount of commitment or effort. Any change, even a minor one is difficult, so it’s vital to be realistic. If you are planning to improve your trading performance, don’t plan on doing too much. 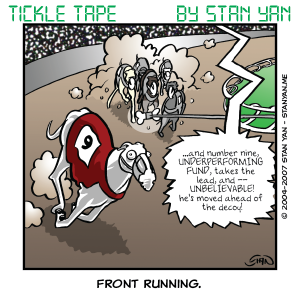 For example, if you are a novice trader, don’t plan on making a 30% profit. Trying to achieve such a high-performance standard will usually lead to failure, and deep down, you know that achieving this goal is unlikely. Set your objectives lower. For instance, rather than aim for making a specific return, you might decide to learn about the trading field and settle for making a series of “practice trades” to learn about trading and develop your intuitive feel for the markets. Set learning goals, rather than performance goals, such as devoting a realistic amount of time each week to learning about the markets. Don’t set unrealistic performance goals that will lead to failure and make you feel down and beaten.

It’s also important to develop a specific plan for how you will achieve your New Year’s resolution. Map out what you will do in a step-by-step fashion. Consider what you will specifically do and when, and anticipate any obstacles that may prevent you from reaching your goals.

For example, determine when and how you will develop trading strategies to achieve your goals, and consider the fact that you may not have enough time to develop these strategies if you have too many personal obligations. It may be necessary to decide specifically how you will free up personal time to work toward developing your trading strategies. That said, in addition to following a specific plan, it is also important to maintain a carefree attitude.

A recent study on how people achieve New Year’s resolutions illustrates that a carefree attitude is useful for achieving your objectives (Powers, Koestner, & Topciu, 2005). In the study, all participants tried to achieve New Year’s resolutions, but some people were overly perfectionistic while others were carefree and independent-minded. The participants in the study who were too exacting actually were less likely to achieve their resolutions, even if they had a detailed action plan.  People who didn’t even have a specific plan did better, as long as they were carefree and independent-minded.

Being carefree instead of being an extreme perfectionist made all the difference. When trying to achieve a New Year’s resolution, major setbacks should be expected. The setbacks aren’t important, but how you react to them is crucial. If you feel that you absolutely must achieve your resolution and that any setback is a sign that you will ultimately fail, then you will probably fail. But if you treat each setback as natural and expected, and if you let your own personal standards guide you, you’ll feel more at ease. You will snap back quickly and keep working diligently toward your objectives.

The start of the New Year can be a time to make exciting new plans. But it is often difficult to turn plans into reality. You can do it, though. Set realistic goals, outline a detailed plan of action, and commit to it. At the same time, be open to setbacks and don’t let them beat you down. If you follow these tips, you’ll increase your chances of reaching new heights in 2006.