Even when you’re a short-term trader, making one quick, astute decision after the next, it’s necessary to plan carefully and act cautiously and deliberately. Consider the case of Andy, a novice trader who allows his impulses to guide him more than his logic. If he traded more deliberately and spent a little extra time fleshing out the rationale for his trading plan, he would trade more profitably. 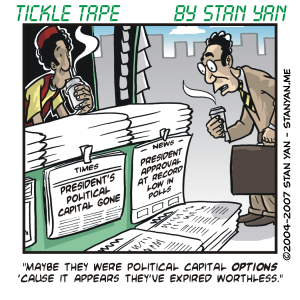 Andy has been honing his trading skills by studying the price changes of a particular stock. He found that the stock trades between $20 and $25, depending on profits during a particular quarter. There are times, though, that the price hits $45 when a financial analyst talks it up, or after a major product announcement. The company has been shaky for years.

The management of the company frequently changes, with officers resigning or dismissed when they fail to turn the company around. In addition, sales are seasonal, with most sales during holidays and the Fall. But the price is far from predictable. Shortages of supplies and problems with distributors cut into profits. It would be wise to be a little cautious while trading this stock. It’s steady most of the time, but it is prone to extremes for unknown reasons at other times.

Despite identifying specific factors that impact the price, though, Andy has lost over 75% of his account in the past year. He seems to buy at a high point believing it will go up higher because as he says, “the stock is gaining momentum and about to reach new highs.” Andy’s approach to trading is perplexing. The stock price throughout a given year rarely hits the high of about $45. But Andy buys at the high and ends up selling when the price plummets. Andy has fallen prey to a common ailment. He makes impulsive decisions without thinking things through carefully, and in the end, sabotages his efforts.

He needs to trade more cautiously and deliberately. Rather than vaguely work on the hunch that the price is going to hit a new high, he should question his reasoning. Why might the stock go to a new high? The company has a troubled history with management unable to change its rocky course. There’s no good reason to believe that the stock will hit a new high. His hunch is unfounded. It isn’t based on any of the information he has gathered about the company.

Andy has observed that the price moves in a cycle, so why doesn’t he try to trade on this information? Andy’s biggest problem is that he isn’t thinking things through. He isn’t trying to make educated guesses on the information he has gathered. Instead, he tries to trade based on his hunches and intuition, but he doesn’t have enough experience to do that very well. In many ways, he is sabotaging himself. While some traders over-think a trading plan, Andy needs to do a little more thinking. He must try to make his trading approach more systematic.

By considering the factors that may correlate with price movements in the stock, he can more accurately anticipate the price movements. He may not be right all the time, but he would be correct more times than the current approach he has been using, which is not based on any reliable information. Winning traders use their intuitions to make trades, but they also think like an intuitive scientist developing educated guesses and seeing if they pan out. It is vital to study the markets, understand them, and develop your own personal theories as to how they operate. The more you can develop these theories and use them to guide your decisions and trading plans, the more profits you’ll make.