Jim has just purchased 500 shares of a hot new company he’s liked for years. In a calm and rational manner, he notes that a set of momentum indicators suggests the price will keep moving upward. Despite what his logical mind tells him, he’s afraid. He asks himself, “How can I be sure the stock will continue to move in the right direction? I don’t want to be wrong; it will be devastating if I am.I’m often wrong and this may be one of those times.” Jim is experiencing self-doubt that is overpowering his rational mind. Logically, he knows his trading plan is sound, but emotionally, he can’t help but think he is dead wrong. Sometimes, and for some people, one’s emotional side may over-power one’s rational and logical side. For some people, self-doubt, fear, and uncertainty may be the result of psychologically deep and early childhood experiences: it may go back to the early bond formed between parent and child. 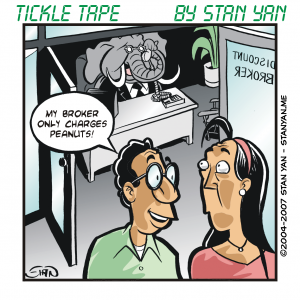 As we’ve often said in this column, not all of the psychological issues that traders face have roots in “depth” psychology, and even if some do, one may do fine as a trader by just looking at the surface rather than down into the depths of one’s psyche. It’s possible to merely monitor one’s maladaptive behaviors, practice engaging in alternative thoughts and behaviors, and leaving it at that. But for those who may be interested in looking deeper, consider that the way you interact with the markets may be similar to the way you interact with significant others in your personal life: You may personify the markets.

Trading coaches, such as Mark Douglas and Dr. Richard Geist, have said they have worked with many traders who personify the markets: As they interact with the markets, they tend to believe they will face the same reactions they expect in interpersonal relationships, which in both cases may be a hindrance. In Trading In the Zone, for example, Mark Douglas points out that traders often equate losses in the markets with their parents punishing them for breaking parental rules.

When the markets are viewed in this way, losses take on a greater personal significance: they are a deeply felt threat to one’s basic well being. Early parent-child relationships can shape people’s expectations about how they respond to others as adults, and these expectations may influence how traders react to losses in the markets. Ideally, healthy children develop a secure attachment with their parents; these children learned that their parents were a “secure base” in that they were dependable, reliable, and would always be there. This allowed the child to explore the uncertain and terrifying outside world in a carefree manner.

They knew that if they encountered fear that they could quickly return to their “secure base” and gain comfort and safety. Other children formed an insecure attachment style: they were fearful of leaving their parents’ side because they didn’t believe their parents would be there when they returned. They didn’t see their parents as dependable and as a source of comfort and safety. They thus were afraid to venture out, did not learn to cope with uncertainty, and in adult life tend to believe that they will face failure and rejection.

Having an “insecure” attachment style may apply to the way some traders face the markets. They may have not learned how to cope with uncertainty in general and be afraid of the uncertainty of the markets in particular. In their interpersonal lives, they may believe that loved ones are undependable and unreliable. They often expect rejection from others and long for relationships that provide the unflinching security that their parents could not provide. They may extend these expectations toward the markets.

They may unrealistically believe that all their efforts will result in failure and feel a strong need to seek out safety, security, and certainty. But the markets are not certain, and one must learn to cope with uncertainty. There is no such thing as a safe trade, and being afraid to venture out into the chaotic unpredictable market hinders performance severely. So it’s important to determine if you have a “secure” or “insecure” attachment style when it comes to the markets. Not everyone may personify the markets in this way, but if you do, it useful to be aware of it, explore it further, and try to gain control of it.