Have you ever sat looking at your screen for an hour and had no idea what to do? In the back of your mind, you start to think, “I should be doing something.” As an active trader, you may be prone to put on a trade. That’s what traders do, right? They trade. Many traders overtrade when they are bored. They are bored and impatient and put on trade even though they don’t have a very good trading idea. They trade on impulse with no specific plan or rationale. It’s just something to do. It may not seem like much of a problem but if you do it over and over again, little losses here and there and commission costs start to add up. In the long run, it is in your best interests to control this impulse. 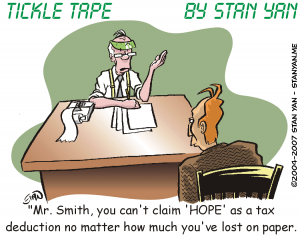 Why do people overtrade? Ari Kyiv suggests a few possible explanations in his book “Trading to Win.” Some traders may overtrade merely to gain some sort of involvement. They can’t sit still and do nothing. It’s as if they think, “An active trader trades all day.”  If you hold this belief, you will tend to feel you are missing out on something if you stand aside and do nothing.

Other traders try to reach high-performance goals and feel that unless they make trade after trade, they have no chance of reaching them. Professional institutional traders, for example, must make profits to stay employed. Sitting around doing nothing doesn’t make them think they can make a profit. When you fail to reach your performance objectives, there’s a powerful motive to make trades just to feel you are making some progress. What often happens, however, is that bad trades are made and losses are mounted. In addition, while one is engaged in these minor losing trades, he or she is not searching for solid, high probability setups. In the end, profits objectives are missed completely.

Personality may be an issue for some traders. Traders with an impulsive temperament may crave the excitement that excessive trading brings. Still, others may overtrade to cope with a general frustration they feel in their lives. For them, putting on trades is like playing the lottery: every trade brings hope of success and fulfilment.

Dr. Brett Steenbarger in his book “The Psychology of Trading” suggests that overtrading may be the result of daydreaming. Traders want to have a feeling of power and control, but the markets are difficult to control. Daydreams allow a fearful trader to feel powerful. Dreaming that you will make huge winning trades allows them to feel better. But many times, traders start believing their daydreams. And when daydreams start to seem plausible, they may wrongly believe that all they have to do is put on trades and they will be profitable in the end.

Even though commissions are relatively low these days, you can still end up paying unnecessary commission costs by overtrading. In addition, some of those small, seemingly insignificant trades can become significant if you lose perspective and invest too much money on a trade that is a bad idea. One of the best antidotes to overtrading is to be brutally honest with yourself. Evaluate your trading ideas. Constantly ask yourself whether your trading ideas have merit. If they don’t, it’s essential to give them up and search for a better trading idea. It’s also useful to develop and trade very detailed trading plans.

Before you put on a trade, make sure your trading plan is clear. Identify the signals or indicators you will use to monitor the trade. Anticipate which indicators will signal when a trade is going against you. Justify your trading plan, and make sure that you have sound reasons for putting on a trade. If you trade good ideas, and avoid making trades on impulse to quell boredom, you’ll increase your profits, and feel good about how you are productively using your time to make those profits.