Jim is focusing on a big trade that he’s just put on. He has 25% of his trading capital on the line, and he feels it would be a disaster if he doesn’t see a substantial profit. He can’t afford to lose 25% of his capital. A jumble of thoughts race through his mind as he monitors the trade and anxiously awaits the outcome. He can barely think clearly as his emotions overpower his ability to focus his attention on the trade. 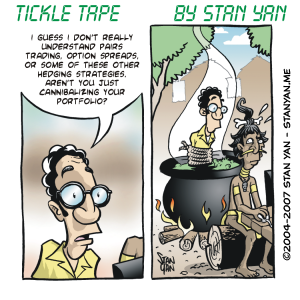 Jim’s emotional reactions are understandable considering the amount of capital he has risked on a single trade. It’s possible that he can pile on big profits from the trade, but he knows he can potentially lose a lot as well. He’s paid both a financial and psychological price for risking such a large amount of capital. He is having trouble controlling his emotions, and he is not thinking clearly and rationally. A more desirable way to trade is to limit one’s risk on a single trade. It eases some of the pressure and allows most traders to think more clearly.

Seasoned, professional traders do put on big trades, but it would be in your best interests to determine whether taking such risks is a good idea for you. Seasoned traders have established trading skills and rock-solid confidence. If they lose a large stake, it would certainly be a setback, but they know that they have the ability to make the money back, eventually. On the other hand, if you are a novice trader, you know deep down that it’s quite possible that you can’t make the money back. No matter how hard you try to ignore this possibility, you know in the back of your mind that it’s a real threat, and it haunts you.

Novice traders would do better, in the long run, to limit their risk by placing relatively small trades (about 2%, for example). There are financial and psychological benefits for limiting risks. A hard reality of trading is that there are few foolproof trading strategies. Even the most reliable strategy is bound to fail eventually. Market conditions frequently change, and when they do, your strategies must be changed also. The trouble is that you don’t know when a strategy will fail or when it will not beforehand.

Your best defence against the sporadic changes in market conditions is to limit your risk on a single trade. Think in terms of the big picture. Your ultimate goal is to achieve profitability across a series of trades. The outcome of a single trade is relatively insignificant. All that matters is the overall outcome. Limiting your risk on a single trade ensures that should you encounter a string of losing trades, you can survive and avoid completely blowing out your account.

There are also psychological benefits for thinking of the big picture and limiting your risk. When you put a relatively small amount of capital on a trade, you truly know that you have relatively little to lose. Less of your money is on the line, and less of your emotional well being is on the line. You can more easily reassure yourself that you can survive no matter what happens on a single trade (or even a few losing trades, should they occur).

Don’t let your emotions overpower your rational decision-making abilities. Think of the big picture. All that really matters is winning over a series of trades. The outcome of a single trade has little financial and psychological significance when you view it from this perspective. Limit your risk on a single trade and you’ll be able to cultivate the winning mindset of a consistently profitable trader.