In studying the genetic influences on height, Sir Francis Galton compared fathers and sons. He reasoned that fathers’ height should predict sons’ height. It didn’t. Indeed, taller fathers had shorter songs and shorter fathers had taller sons. The relation wasn’t perfect. Galton then made a logical error. He surmised that over the generations, taller people would get shorter, and shorter people would get taller and that a process would occur where height “regressed toward mediocrity.” In his analysis, he forgot to account for the fact that mothers’ genetics play an equally important role in determining the height of their children.

Men with a tall gene may not marry a woman who also has a tall gene, and thus, the correspondence between parents’ and children’s height is a matter of chance. Despite Galton’s logical error, we are stuck with the term “regression toward the mean,” a misnomer. The term is a statistical concept that refers to how points are spread around a linear regression line, specifically, how well “predicted values” based on the equation for the line match the actual values on which the line was derived. 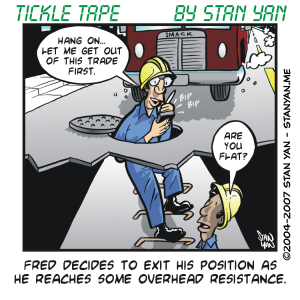 How does this all relate to trading stocks? “Mean reversion” is a common term in the trading literature. It refers to the idea that when a stock is extremely high (or low), it will “revert” to the mean level of the stock. This is a fascinating concept, and we can’t cover it completely here today, but mean reversion is an interesting mix of statistics and market psychology.

Another way to view mean reversion is as a “failure to meet expectations.” According to statistical theory, a regression line is used to make predictions, and thus, we can view the line as making a prediction about our expectations. Consider a simple equation that predicts total weekly sales from a number of cold sales calls made during the week. Because not all cold calls result in a sale, the relation between the predictor and criterion variables is imperfect, and thus, the number of sales calls made under-estimates the number of weekly sales.

Some of these assumptions are met, most of the time. First, stock prices tend to be based on mass psychology, or opinion, which may fluctuate randomly. The opinion of the masses decides the value, rather than the fundamentals of the company, especially in the relatively short timeframe in which we trade. The actual value probably doesn’t really change. So the first two assumptions seem to hold. But is the posted price discrepancy between point A and point B completely due to random factors? It seems to depend.

The prices of stocks are somewhat based on the fundamentals of the company, which may or may not change. It is also possible for popular opinion to change and remain stable over the long term. To the extent that either of these factors accounts for the change in price between point A and point B, mean reversion will not occur. For example, if a company starts making huge earnings and sustains them, both the fundamentals of the company and popular opinion of the company may change between point A and point B.

The change in the observed price is not purely random, and thus, one should not anticipate the price returning to previous “mean” levels. In other words, one shouldn’t expect mean reversion to occur without fail. That said, however, it does appear that many times mean reversion is pertinent. For example, a stock price often rises artificially due to poor information, which is a “random” effect.

Also, during a given time point, the masses may become “elated” and this may reflect a random change in mood that may dissipate over time, and the “true” value of the stock will shine through and “revert back to normal.” Mean reversion is an intriguing concept. In the end, it is merely a mathematical theory, but it often applies to trade because market participants are human and because human decision-making is fraught with random errors, regression effects proliferate.