A confident, optimistic attitude is required to achieve lasting success as a trader. Even solid, reliable trading strategies are fallible, and one is bound to face losses. And for the trader without the proper mindset, losses conjure up extreme feelings of disappointment. If you can’t objectify the trading process and stay calm and rational, your emotions will fluctuate with your account balance.

The best way to deal with the ups and downs of the market is to build up your trading skills to the point that you can trade profitably in a variety of market conditions. Once you develop solid, robust trading skills through extensive practice and experience, you’ll also gain the indisputable sense of self-confidence that comes with it. It will be hard to do. It will take time, effort, and persistence, but it’s the only way you’ll be a consistently profitable trader. Some people have rock-solid self-esteem and are able to meet the challenge. 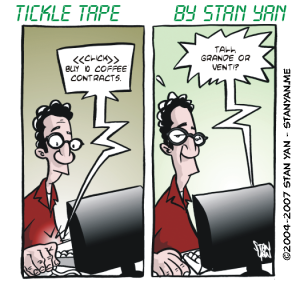 But others have more wavering self-esteem. When they’ve tried a new activity, they have often failed. And they carry this failure and low self-worth with them throughout their lives, and into the trading arena. It’s hard to cope with the double pressure of feeling personally inadequate and trying to master the chaotic and unpredictable markets, which even the most exceptional people have trouble doing. To cope with the uncertainty of success, powerful, dynamic psychological strategies are used to protect one’s ego. For some people, it’s just too difficult to face their limitations, so they conceal their inadequacies. They feign trading expertise and tell themselves statements like, “I’m a natural-born trader,” so as to bolster their self-esteem.

These grandiose images of themselves are used to defend their weak egos. It’s like unconsciously thinking, “I’m not incompetent; look at how self-assured and naturally skilled I am.” But such people are not genuinely confident. Indeed, they are anything but confident. Since their grandiose thinking is merely a way of protecting their brittle, fragile ego, they are especially prone to feeling extreme emotions when they fail. Each failure dramatically contradicts their grandiose view of themselves, and they react defensively with anger and frustration.

Psychologists Rhodewalt and Morf (1998) illustrated this psychological process in an innovative study. Participants were diagnosed with regard to their grandiosity and placed into one of two groups: grandiose view of themselves or accurate view of themselves. They were then asked to complete two separate intelligence tests, one right after the other. Since the items on the tests were quite difficult, participants didn’t know if they answered correctly.

This allowed the researchers to manipulate the feedback given to the participant. Researchers told some participants that they failed on the first test while they succeeded in the second test. Other participants were told they succeeded on the first test and failed on the second test. People who held a grandiose view of themselves responded with extreme anger, frustration, and disappointment when they failed compared to people with an accurate view of themselves. They were especially emotional when failure followed the success.

People with a grandiose view of themselves changed their self-view radically when a failure followed a success. Whereas they thought highly of themselves after success, they felt completely devastated after a failure. This study shows how individuals with chronically low self-esteem, who disguise their low self-esteem by puffing themselves up, are vulnerable to extreme changes in mood and feelings of self-worth. These dynamic, defensive coping processes can hamper trading, where failures often follow successes. Under these conditions, the person with chronically low self-esteem can rapidly shift from feeling invincible after a win to feeling extreme despair and hopelessness after a loss.

The best way to address a grandiose view of oneself is to first acknowledge that one is shoring up one’s ego by exaggerating one’s competence and abilities, and then, one must take steps to develop a view of oneself based on accurate assessments of competence. One of the most foolproof ways of evaluating your trading skills accurately and objectively is by keeping a trading diary. Record your trades, and keep accurate figures on your performance, such as a win-loss ratio. By taking an honest look at the record, you can see precisely how well you are doing.

There is no need to rely on subjective self-assessments, which are often biased, and may reflect the need to protect one’s ego. It is essential to face your inadequacies and build up your trading skills to compensate for them. Trying to hide them, or trying to hide from them, will prevent you from identifying your limitations. It will also sap up precious psychological energy as you try to defensively protect your ego. By admitting your faults, and taking steps to correct them, you will free up psychological energy and build the skills you need to be a consistently profitable trader.