John is kicking himself right now. He just made an unexpected losing trade and he feels especially down. He expected to make a killing, and he was looking forward to winning and celebrating big. He thought he had done everything to prepare for the trade. He had looked at the moving average to discern the trend. He looked at the highs and lows of the stock for the past two months and set his stop loss accordingly. But in his strong desire to believe that he was about to execute a winning trade, he made a fatal error: He forgot to account for an upcoming earnings report. The company failed to meet analysts’ forecasts, and the stock fell hard and fast. John didn’t lose too much. His protective stop saved him, but it still hurts. He had gotten his hopes up, and now, he is especially disappointed. 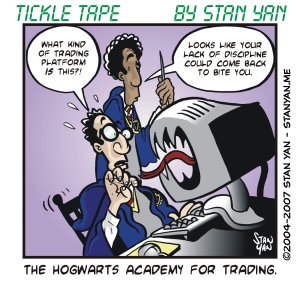 John’s plight is common for both seasoned and novice traders alike. There is a strong human need for eternal optimism. John isn’t naïve. He knows that earnings reports can unexpectedly impact a stock price, but he had wanted to make a big winning trade so desperately that his unconscious mind prevented him from seeing matters clearly. Sometimes, we want something so strongly that we see things that just are not there, or we shut out things that we don’t want to see. That’s what John did. He didn’t look carefully at all possibilities and he missed the obvious.

Why does John feel so badly? It could be for a number of reasons. First, he got his hopes up, but his dreams were dashed. When we expect a big win and don’t get it, we are especially hurt. Second, John may be trying to live up to his own unrealistic, perfectionistic standards. He may be beating himself up because he wrongly believes that he must trade to perfection; he must account for all possibilities. It is a fact that had he been able to see that an earnings report was scheduled, an obvious potentially adverse event, he would have saved precious trading capital. But mistakes do happen. We are human. We often let our emotions take over, and when that happens, our rational mind doesn’t stand a chance.

How can John feel better? He needs to change his frame of reference. When many people make an obvious mistake, they let their superego rule. Our superego consists of the ideals we strive for and the moral rules that our parents taught us while we were youngsters. When many people make a mistake, they treat the situation as if a parent or teacher were scolding them for breaking a rule. They re-experience feelings from childhood, hurt, beaten feelings. In some cases, the feelings may be shame or guilt. This is the wrong frame of reference to use to understand trading setbacks, however.

When you lose money on a trade, it is not useful to allow your unconscious to equate the loss with being punished by your parents for breaking a rule. Instead, it is vital to look at matters from the perspective of a trader. Traders are human and they make mistakes. How many people actually make a living as a full-time, active trader? Hardly any. If you work under the assumption that anyone can trade, you will feel bad when you make a trading error. However, if you work under the assumption that few people can actually trade profitably, you’ll quickly forgive yourself for making a mistake or a losing trade.

Every trader makes mistakes. There is a lot of information to sift through, and as we all know, our zealous pursuit of money often gets in the way of our ability to see the markets with crystal clear accuracy. When you change your frame of reference, your entire perspective changes. You stop getting your hopes up. When you remind yourself how challenging trading really is, you really start to recall that any given trade has little relevance in the context of a larger set of trades, and thus, it is unreasonable to expect success on a single trade. If you don’t get your hopes up too high, you cannot be knocked down too far when a trade turns out to be a loser.

And when you realize that trading is so difficult that few people can trade the markets with perfection, you’ll accept your limitations and appreciate the winning trades you do make, instead of beating yourself self up for making the losing trades that are commonplace in the trading world.