It’s often bantered about among short-term traders (traders that are flat the majority of nights), whether, one should “have an opinion”.  Many traders will say that they don’t have an opinion and that they approach each day with a blank slate that allows them to “read and react” to the markets better.  They want no preconceived ideas to cloud their ability to simply listen to what the market tells them. Others will say that of course, they have an opinion. They follow the markets each and every day, it’s their business, and it’s somewhat subconscious for them, to always have certain ideas or scenarios about how the markets may act in the future.  For this group of traders, their skill is in having an opinion, but not letting it interfere with their ability to make money. 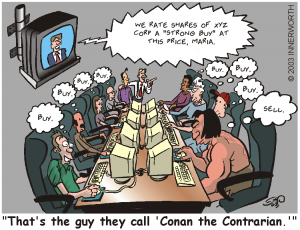 What’s common amongst the way these two groups approach trading is their willingness to be adaptive. Those traders who say they have “no opinion” say that because they know their skill is being flexible and adaptive to what the market tells them.  The second group while “having an opinion” is able to divert what their initial gut or instincts may have first told them when they woke up and still be responsive to what the screens tell them about future direction.

Over the last 6 months or so we have seen some general weakness in the US dollar and generally, there has been little direct correlation with its action and US equities.  Even on more pronounced days of intraday dollar weakness stocks have had little intraday swings in response to dollar swings. I and a group of traders I work with every day have been aware of this and we have logged this action in the back of our minds.  Recently though, some dollar weakness has seemed to have more correlation with US equities. Many have been screaming for months that the falling US dollar will be bad for US stocks and on particular days when enough dollar weakness does seem to weigh on stocks they pronounce even louder “ We told you so”.

The problem is, however, that for months their opinion of dollar weakness and its effect on stocks didn’t matter and the opportunity cost lost by holding to “their opinion” probably outweighs their potential new opportunity. The point is that in the markets, in the short term, “it only matters when it matters” and being adaptive is critical.  I often like to ask the question each day, “What is working TODAY in the markets?” It may be initiating trades from the long side only, it may be selling downticks in the mini’s when bonds uptick, it may be buying strength in mid-cap stocks with big short interests when there up good even though the major indices are lower. By being adaptive I can simply look at what seems to be working each day on its own and I stand a much better chance of being successful.

So if you are a short term trader: enter each day with an open mind, or have an opinion but know how to tuck it away if needed, and most of all are adaptive.