Don’t let creative journalists or analysts convince you into thinking about the market as a marathon runner: “Every bull market has to pause and get its breath once in a while before it sprints higher.” Or a wild animal: “The claws of this bear market ripped right through the last shred of resistance—nothing can stop it when it gets its blood boiling!”

All too often writers, including or especially financial writers, wax poetically as they attempt to make their stories more interesting for their readers. Instead of saying the market advanced 50 points today, they will attempt to give the market mystical powers. “The market saw a chance to bolt through some resistance today and dashed for 50 large ones.” The market has no eyes. It has no legs. It has no blood to boil. It can’t “see” or “bolt” or “gorge” or “claw.”  It just lies there like roadkill until an amateur taxidermist happens to pick it up and drag it home. Darn, now I’m doing it. 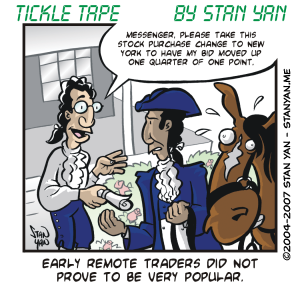 Once you start ascribing human or superhuman characteristics to Mr Market, it can really play havoc with your ability to make sound decisions. You begin to impose your thought process upon the market you are trading and project on to it a life of its own that does not exist. You begin asking yourself: What would I do if I were the market facing a truckload of negative news? If I had just battled my way past all kinds of downbeat pressure, I’d be ready to take a breather and I’d trade sideways for a few days. Please, the market never gets tired. It doesn’t get depressing.

How many times have you heard some pretentious fool talk about the market like this: “The Dow sure looks like it wants to move higher.” “The Nasdaq is determined to go back to the 1650 level no matter what we do!” Hold it right there—the Dow does not want “to move higher” nor is the Nasdaq “determined” to go anywhere. They have as much to say or do about where they close on any given day as an avalanche has about when it starts and where it stops.

What moves the market? It’s traders and investors making informed and uninformed decisions. They use sophisticated technical systems, complex fundamental approaches, tips, hunches, guesses, bad information and even astrological signs to make their decisions to buy, sell, or stand aside. All the educated and uneducated conjectures are tossed in the pits and the market is pushed or pulled to a higher or lower close.

It, meaning the market, has nothing to say about the daily results. That’s why you must not anthropomorphize it. Take it for what it is—a dumb, inanimate blob. Do your very best to anticipate where it is headed, trade accordingly and keep a stop in place if you are wrong. The market is going to move—which way, for how long and at what speed—we don’t know. For this reason, we take it for what it is and avoid empowering it with human or magical attributes.