Carl has dreamed of being a winning trader since he was a teenager. He tracked the market in high school and started trading stocks in college. But he has blown out twice in the last five years. He works hard to save trading capital, but the most he has ever raised is $5,000. He read “Market Wizards” and dreams of being the next Tom Baldwin who turned a modest account into a fortune. Right now he feels beaten, though, and he is seriously wondering if his goal of becoming a winning trader is just a pipedream. 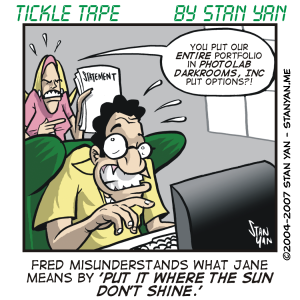 Carl is not alone.  Thousands of novice traders seek out the glory and riches trading offers, only to fail within a year. Is it a pipedream? Yes, for many. Trading isn’t easy money. Although there are a few exceptions, it is practically impossible to turn a small $5,000 account into a large trading account that can produce a livable wage. It’s much more realistic to use a buy-and-hold strategy and hope for a relatively small return if even that. But does that mean one is out of the picture? Not exactly. The would-be Market Wizard can pursue many paths to success. It’s just a matter of developing realistic goals and sticking with it.

An important prerequisite to trading is to have a relatively large trading account, such as $50,000. There are practical and purely mathematical reasons for needing adequate capital. On the practical side, regulations require a minimum balance to short stocks. Trading requires that one be able to go long or short depending on market conditions. On the mathematical side, it is impossible to both manage risk and cover commissions and fees with an account that is too small. On any given trade, the price can only move so far. If only a relatively small amount of capital is risked on a given trade, it is difficult to cover the costs of commissions and fees since the price is not likely to move far enough to make a profit and cover additional costs.

The bottom line is that one must save enough money to build up adequate trading capital. That may mean working an extra job and cutting down on expenses by reducing one’s standard of living. That’s hard to do. It’s a matter of making extreme sacrifices now in the hopes of later benefits. And when it comes to trading, the later benefits may not be realized for several years. This is a significant psychological impediment to overcome. It means making some hard decisions.

That said, one doesn’t have to completely stand aside as he or she builds up trading capital. There’s still a lot you can do while you wait. You can paper trade. You can develop trading strategies and outline trading plans in order to get a rough idea of how you might do as a trader. Many seasoned traders warn, however, that a paper trade doesn’t have the same psychological impact as an actual trade. When there is no money on the line, nothing is at stake psychologically.

You have relatively little motivation to focus all your energy and attention on the trade. One way to work around this issue is to make small practice trades: Put a little real money on the line, so that your senses are heightened, and you truly feel that you are risking something. You are going to lose money on the trade because of fees and commissions, but you’ll learn about your trading personality through the experience. You can look at the expense as tuition paid for learning a valuable lesson. Another way to learn about trading is to set learning goals. You can take courses from reputable trading schools, or do home study courses to learn the basics of trading. Seasoned traders warn to be wary of get-rich-quick schemes, so it’s worth your time to sift through all the different methods and separate the methods that merely offer false hope from the methods that can be legitimately used to trade profitably.

So if you have blown out your account, don’t lose hope. There’s still a lot you can do to work toward your goals of becoming a winning trader. You can focus on building up trading capital and on building a knowledge base of trading methods. By focusing on your dreams, and showing unwavering persistence, you can beat the odds and become a consistently profitable trader.