When it comes to evaluating your performance, there are times when there is no substitute for studying the cold, hard facts. In the end, the bottom line is unavoidable: If you are not profitable across a series of trades, you are out of business. It’s vital to realistically gauge your performance. If you are like many traders, however, your unbridled need to win takes over. You see only what you want to see, but an outsider would see that you are about to fall into the abyss yet don’t know it. It’s a more common ailment among traders than most people realize. Looking at the cold, hard facts can ding your ego, and that’s why it is so hard to look at our performance honestly. It’s often easier to put on blinders to avoid seeing how poorly you are actually doing. The winning trader, however, isn’t afraid to coldly and objectively look at performance statistics.

From a purely psychological view, it isn’t always useful to focus only on performance outcomes. If you are a novice trader, for example, it takes time to build up your trading skills. Expecting too much, too quickly in terms of performance outcomes will frustrate you. That said, if you lose a great deal of money trading, you might end up in so much debt that it would be virtually impossible to break even. Looking at the cold, hard facts realistically is a necessity, not an option. Let’s consider a few popular statistics that indicate how well you are doing. 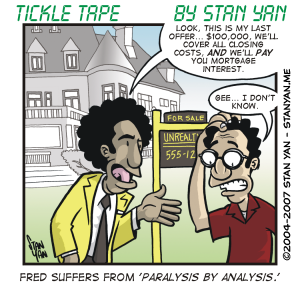 First, what is your hit rate? How often do you make money? Is it 20%, 10% or less? It’s necessary to look at your past record and calculate a rough estimate with regard to the percentage of trades you make that are winners. This isn’t the only statistic you should look at, but it does suggest how well you are doing. The downside of relying on just this one indicator is that subconsciously, or in the back of your mind, you may want to increase your hit rate by making a few small profitable trades.

For example, if out of 10 trades, you make eight losing trades, you might be tempted to make two winning trades, even if it is just $20 per trade, to make yourself feel good about having a 20% hit rate. Obviously, the 20% estimate is off. It means essentially nothing if you lost $10,000 on the eight losing trades! That’s why you must also compare the amount of money you lose on your losing trades to the amount of money you gain on your winning trades, what some traders call the dollar-based win-loss ratio. Psychologically, this is a much harder statistic to calculate than your hit rate. It’s hard to look at just how much you are losing compared to how much you are winning.

Many traders prefer to deceive themselves. They focus on their winning trades, but ignore their losing trades. You can feel like a super-trader if you focus solely on the winning trades where you made huge profits while ignoring losses. All you are doing, though, is fooling yourself. For example, who cares if you made $30,000 on your winning trades if you lost $35,000 on your losing trades and had to feed your account $5,000 last year to make up the difference? It may be hard to put your pride and ego aside, but unless you take an honest look at your dollar-based win-loss ratio, you will not have an accurate gauge of your performance.

Finally, it’s also important to look at commission costs and the size of your account. If your account is small, commissions will put a dent in your overall profits. Account size does matter, but many newbie traders like to hold on to the dream of striking it rich even though they have a relatively small account, and thus, they avoid taking an honest look at account size and commission costs. Don’t set yourself up for failure. You need money to make money. It’s wise to look at how much it costs you to trade and adjust your goals accordingly. You may have to get a second job to build up investment capital, for example, if your account size is too small for your objectives. Again, it may be hard to admit that you have limited financial resources, but it’s better to look at it now and make plans for the future than unrealistically and fruitlessly waste your time working toward a pipedream.

Humans are prone to eternal optimism. Optimism is good, but it must be tempered by realism. Don’t be afraid to take a good hard look at your trading performance. By looking at your performance honestly and frequently, you’ll be able to make midcourse corrections so that over the long run, you will end up profitable.