Whether you are a long-term investor or a short-term trader, you must look through reams of information, such as charts, analyst commentaries, and financial statements, to arrive at an astute decision. You have to sift through it all, weigh it appropriately, and use your intuition to make the most informed decision possible. Usually, it’s merely an educated guess in the end. Humans are hardly objective, logical processors of information. 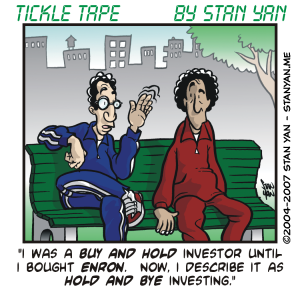 They suffer from what decision-making theorists call confirmation bias. When devising a trading plan, there is strong pressure to reach a decision and implement a plan. The consequences of a wrong decision can be financially disastrous. The added pressure gets to us, though. Rather than look at each piece of information objectively, we tend to pay closer attention to information that confirms our initial decision while ignoring contrary information.

How can confirmation bias be curbed? A recent experiment by Jonas, Graupmann, and Frey (2006) shows that maintaining a pleasant mood can lessen the tendency to seek out confirming information. University students were asked to make an initial decision and then study a series of informational statements that either supported or ran contrary to their initial decision. They were also told that there was a “right” decision and a “wrong” decision, and if they made the “right” decision, they would receive a reward.

These findings show the advantage of cultivating a winning attitude. When you are in a good mood, you are more likely to look at contrary information regarding a decision in an unbiased way. Don’t let the confirmation bias influence your decisions. Cultivate a peak performance mindset. Your intuitive hunches will be more accurate if you do.