In his book “All Too Human: A Political Education,” former political operative George Stephanopoulos describes the motivating forces in the “War Room” of the Clinton presidential campaign headquarters in Little Rock. A centrepiece of the room was a whiteboard reminding everyone, “Change vs. More of the Same. The economy, stupid. Don’t forget health care.”

In the 1992 election, the stagnant economy was on everyone’s mind, and obviously, focusing on change was a sure vote-getter. But humans have a tendency to forget the obvious. We often think that life is more complex than the issues right in front of us, and that obvious solutions offer little solace when trying to find solutions to seemingly insurmountable problems. 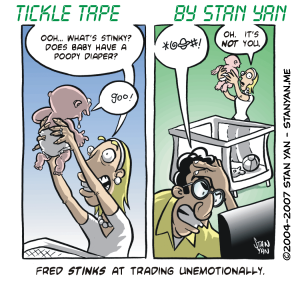 The markets are complex at times, but the psychology of the market is not. And the psychology of winning isn’t all that complicated either. It is vital to accentuate the obvious. You may have heard it time and time again, but there are a few axioms of trading worth repeating: Trade with discipline, manage risk, and think of the big picture. Each of these seemingly obvious issues can powerfully influence your trading performance.

Trading with discipline means developing a detailed trading plan and following it. Obviously, if you don’t have a plan, you’ll trade by the seat of your pants and make errors. You’ll enter too late or exit too early. You’ll make impulsive moves that lose money.

The disciplined trader is the winning trader. It’s obvious, but many traders forget this simple fact of trading profitably. Similarly, many traders refuse to admit that there is an element of probability involved in trading success. Sometimes the odds work in your favour and sometimes they don’t. If you manage risk, you’ll be able to account for those times when the odds just are not working in your favour. If you don’t manage risk, though, you won’t be able to ride out the bad times.

Again, it’s obvious, but many traders wipe out their account balance because they risked too much on a few bad trades. Similarly, no single, isolated trade should be more important than any other trade. Don’t elevate a single trade psychologically, by imbuing it with extra emotional significance, or financially, by increasing your bet size for no good reason. The single outcomes don’t matter, but the big picture does. Always look at the big picture. The amount of profits you make across a series of trades is all that matters.

Don’t under-emphasize the obvious. Accentuate it. Get a whiteboard and write down your favourite axioms of trading. Put the list in a prominent place to remind yourself throughout the day of what’s important. It will keep you focused and make you a winner.