Jim has lost a bundle in the last six weeks. He was riding high at the end of 2004, but when the New Year started, he couldn’t get his act together. He hasn’t been trading very long, but he has seen some success. The past two weeks, though, have been particularly devastating to his account balance and to his ego. It all seemed so simple a couple of months ago.

But recently, he has made a series of trades that have wiped out six months worth of profits. For the past week, he has been determined to get his revenge. Although seeking revenge is a natural response to losses, it rarely fixes things. As tempting as it is to work with an “I’ll show them” attitude, it doesn’t work well for trading the markets. It just puts you on edge, and there are not any real enemies to fight against when plotting revenge. Ultimately, the only enemy is you. 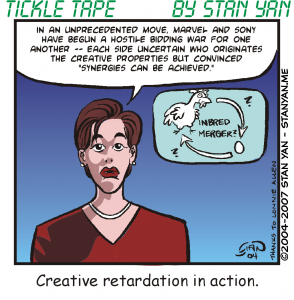 A vengeful spirit usually makes matters worse. It’s better to trade calmly and logically, rather than in spite and on impulse. It’s easier to lose money than it is to make it back. It’s just a matter of the mathematics of trading. Lost money is difficult to make back because of margin requirements and risk management. Recovery will require skill, time, and effort. Seeking your revenge isn’t going to help you accomplish the daunting task of recouping your losses.

We seek out revenge when we feel that we have been unnecessarily wronged. A need for revenge reflects a sense of overconfidence. Some overconfident traders are novices who made a bunch of wins, and they mistakenly believe that just because of a run of good luck, they now know how to trade like a seasoned pro. Because they believe they are now skilled traders, they expect to always make big wins. But they aren’t skilled traders. And when market conditions change, and they always do, they lose and lose big. From their point of view, they are angry. The markets should have provided rewards, yet they are now beset with doubt and losses.

It’s easy to understand why novice traders working under the assumption that they “should” have made wins are angry upon realizing a loss. When we feel that something is owed to us, we become angry when we don’t get it. We feel we were entitled to win, and when we didn’t, we see it as an affront. It would be nice if we could win across a variety of market conditions, but not every trader has such fortune or skill.

Losses are inevitable, and when you’re a novice trader, you should expect to go in losing until you develop enough skills to trade more profitably. Although it’s understandable, seeking revenge isn’t going to help. When we seek revenge, we are agitated. All our energy is focused on fighting. It works for a wild animal ready to bring down an opponent, but trading is largely an intellectual endeavour. You need your wits. You need to be calm, focused, and objective.

Rather than seeking revenge, it’s more useful to think in terms of making a strong commitment to success upon encountering a setback. Don’t think in terms of “beating an opponent.” Think in terms of building up your trading skills. Tell yourself that you are committed to mastering the markets and that you will persist and overcome any obstacle. In the markets, it isn’t useful to think of obstacles as other people. You can’t dominate the market. Unless you are a billionaire who can actually manipulate the price action, you have to settle for going where the market takes you. You can’t impose your will onto the market, and that’s what you are trying to do when you try to seek out revenge.

Sometimes market conditions are not conducive to your trading style and there is nothing you can do about it. When the right market conditions aren’t there, you have to stand aside and wait. If you go in there fighting, you’ll probably just make more bad trades and lose even more. It’s better to stand aside and use that pent up negative energy to study the markets or to learn new trading strategies, but whatever you do, calm down. If you can stay calm, even during a major setback, you can think creatively and figure out a way to trade profitably until you make back your losses. Plotting revenge only makes matters worse.