Bob’s been trading for the past year. He’s still a novice, but he has made hundreds of trades. He’s going long on Intel today. He has a plan. He has managed his risk. This trade is just like any trade he has put on before. There’s no reason to feel different about this trade, but for some reason, it is different. He’s not sure he can make the trade today. He has been wondering why he continues to trade. He thinks, “Is this still fun? What’s the point? What am I trying to accomplish in the big picture?” 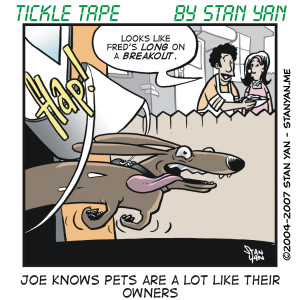 In this trade, right now, Bob is carrying around excess emotional baggage. He has taken an ordinary trade and made it symbolic of a bigger issue; it has a deeper meaning. Bob is contemplating what this trade means for him. Most traders advise taking the day off when one is feeling out of sorts. But in Bob’s case, it may not work. Bob is questioning his reasons for trading. He isn’t sure why he is doing it, and he is elevating the significance of his routine trading activities. He can try to put it out of his mind today, but next week it’s likely to creep up again. In the back of his mind, he knows he doesn’t have a plan for the big picture.

Many traders can achieve some short-term success; the challenge is maintaining enduring success over the long haul. Winning traders seek out new challenges. They further hone their skills and continue to enjoy the game. But Bob is ready to stagnate. He is almost ready to quit. He needs to find some answers, and fast. Do you see how trading fits in the big picture for your own life? If you don’t, you may be heading for a downfall.

It’s vital to know who you are, where you’ve been, and where you are going next. It may sound simple intellectually, but emotionally, it’s difficult to have a clearly defined identity, to have integrated significant past experiences into that identity, and to know what you want to do in terms of the journey you’re traveling on from now until the end of your life. If one doesn’t know the answers to these fundamental questions, he or she is likely to let these unresolved issues interfere with his or her trading performance.

Finding answers to past and future psychological concerns isn’t easy. It takes some amount of reflection and the realization that some issues can never be fully resolved. So what can the typical trader do? When we’ve discussed this issue in past columns, many readers have asked us how they can get rid of past emotional baggage. A couple of trading coaches said they thought that few people could actually resolve the emotional baggage themselves. Indeed, there’s only so much that can be accomplished by reading self-help articles on a website. If a person has deep-seated unresolved psychological issues, some form of professional help is warranted.

But for many traders, the key to resolving emotional baggage is to practice self-awareness. Psychologist Carl Rogers believed that people’s past conflicts tend to lie right below the surface of their awareness. If they merely looked hard enough, and let their minds think freely, they could identify psychological issues. Basically, one can contemplate what he or she wants to be and compare it to an honest look at who one really is. If there’s a discrepancy, one feels tension and uneasiness. These feelings need to be resolved.

Changes in one’s goals or life plans must be addressed. For example, if a man believes that he should be a good husband and father, yet thinks that the time he devotes to trading interferes with these needs, he will feel uneasy and ambivalent about trading. Something has to change. He may not need to give up trading, but he does need to explore the issue and devise a solution. Perhaps he can set up clearly defined times where he devotes quality time to his wife and children. The main point is that trying to push such issues out of awareness is just going to make things worse. Ongoing psychological conflicts must be brought into awareness and resolved.

A brutally honest look at one’s aspirations, limitations, and realistic possibilities can go a long way in terms of helping you toss out past emotional baggage. If you work at it hard enough, you’ll be able to focus on your trading and cultivate the peak performance mindset of a winning trader.