Last night, it all seemed so simple. You had a trading plan all worked out. The stock should dip to $50 around noon. You would patiently wait, buy it, and sell when it hit 52 later in the trading day. Things didn’t work the way you had planned, though. When it came to executing the plan, you got a crazy idea in your head. The price didn’t dip. The stock opened at 51 and kept climbing. You decided to buy it before it went even higher. “It’s just a modification of the original plan,” you thought. Buy at 52 and wait for it to hit 54. It made sense. At the time, that is. It turned out that your initial hunch was right: 52 was the high of the day. When it hit 52, the price fell hard.

Before things got worse, you closed the position. Right now, you feel a centrifuge of emotions. You are angry at yourself for making a mistake and disappointed for losing valuable capital, but the most intense emotion you are feeling is guilt. You are guilty of abandoning your trading plan. You feel guilty about the amount of money you’ve lost and can’t stop thinking about how many groceries you could have bought with the money you just lost or how you could have bought your kids a few new videogames. In addition, you have abandoned your trading plan for the fifth time in two months. In the back of your mind, you are wondering if you are trying to unconsciously sabotage your efforts. You’re not only feeling guilty because you have let your discipline waver once again, but you can’t help but worry that if you continue to lose money for a lack of discipline, you will eventually blow out your account. 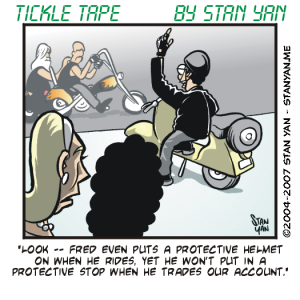 Feelings of guilt are normal. Guilt is a very adaptive emotion. When we do something that we believe is wrong, and will hurt us in the long run, we feel guilty. For example, you cannot continue to make losing trade after losing trade and continue trading. Eventually, you will blow out your account, or get into so much debt that you can’t climb your way out of it. Indeed, guilt is often adaptive, but while trading, guilt can often be distracting. When you feel guilty, you can’t concentrate. You become absorbed with guilt. It is useful to understand your guilt and work through it.

Working through guilt is not the same for everyone. If you are a novice trader making too many big losing trades, guilt is protecting you from disaster. It’s sending you a clear message to make smaller trades. You may want to do something safer, such as making a series of practice trades to develop your trading skills (a form of paper trading) instead of trying to make significant profits. You’ll immediately feel less guilty when you start trading with money that you can truly afford to lose. If you are a more skilled trader, guilt may be less adaptive. Traders who are no longer novices, but are still not masters, tend to set high standards that are difficult to reach. For example, abandoning trading plans five times in two months may not be so bad. It’s a matter of how many trades one makes overall. Abandoning a trading plan five times may result in significant losses, but in comparison to over 100 trades, five trades where you abandoned your plan isn’t very many.

If guilt is preventing you from picking yourself up after a loss and trading the markets with a renewed sense of vigor, it’s vital to control your guilt. First, don’t be so much of a perfectionist. Remember that any type of behavior is hard to change. It is difficult to maintain discipline. It takes practice. Allow yourself time to learn to stick with your trading plan. Second, learn to reframe guilt. You feel guilty when you feel that you have broken a rule. Rather than focusing on the number of times you have abandoned a trading plan (that is, broken a rule), focus on the number of times you have adhered to your plan.

Some may think that this thinking strategy may be a way of fooling yourself, but it is not. If you followed your trading plan more often than you abandoned it, you are showing self-control. Focusing on the positive, the number of times you successfully followed your plan, reminds you that you are capable of discipline and encourages you to continue developing your self-control skills. Third, tell yourself encouraging thoughts. Forgive yourself for making a mistake. Maybe today you had a bad day; you failed. So what? You’re human, and humans fail. Forgive yourself and move on. Don’t let guilt paralyze you. Work through your guilt. Let it pass, and move on to the next trade.