Setting well-defined goals are essential for achieving high levels of performance. Specific goals are the best. They allow for direct feedback. You know exactly where you stand. It may not always be a good idea to set goals too high, however. If you have the requisite skills, setting high-performance goals and trying to reach them can be a powerful motivator. But if you don’t have the requisite skills, and fail to achieve your goals, you may tend to feel disappointed and just want to give up. It may be useful to set a learning goal during initial stages of learning, and then move up to setting high-performance goals after you have achieved an adequate level of mastery. 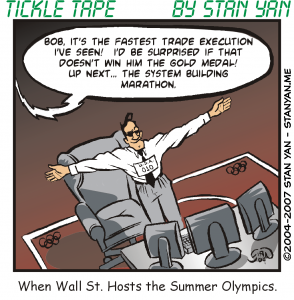 Psychologists have discovered that performance goals, such as trying to achieve a 20% profit for the month, are not always the best goals. Here’s why. One may not have the experience or skills to reach a goal that exceeds one’s abilities. For example, would you try to run a 20-mile marathon if you can’t even run a mile? Of course not. So why make such high and lofty trading goals until you have the requisite knowledge and skills? Many novices make the mistake of setting their goals too high. It’s understandable in away. Ambitious people are taught to set high-performance goals. If one doesn’t even consider achieving an ambitious goal, then one may not even try to achieve it. It is vital to set high standards and do whatever it takes to reach them. But goals must also set realistically.

When novices set high goals that exceed their skills, they usually fail, feel discouraged, and give up. So if you are a novice trader, it may not be a good idea to immediately strive for specific performance goals, such as a 20% profit per month, at least not until one develops the skills to meet this expectation consistently. It’s useful to distinguish performance goals from learning goals.

When we set goals, we usually think of setting performance goals; that is, we think about a specific percentage a month we should achieve. But for novice traders, it is more useful to consider setting learning goals rather than performance goals. A learning goal is more modest and can be achieved more easily. It involves breaking down the larger goal into specific steps that are doable, and rewarding oneself after each step is accomplished.

For example, a learning goal may be stating, “I’m going to study for 30 hours a week to learn a new trading technique.” The specific goal will not immediately lead to the larger goal of making a 20% profit per month, but it is easy to achieve, will lead to personal satisfaction upon completion, and in the long run, will contribute to the long term goal of becoming a seasoned trader.

So if you’re a novice trader, set yourself up to win. Don’t set overly high-performance goals. Set high and realistic learning goals instead. Break the larger goal down into specific steps, and reward yourself after you complete each one. When you become a seasoned trader with advanced skills, you can set out to achieve those high-performance goals. But initially, it’s in your best interest to focus on skill-building, rather than high performance.