Despite all our best efforts, it’s hard to pick ourselves up after a fall. You’ve heard it time and again: Traders must learn to expect losses, take them in stride, and recover from them. Depending on your track record, however, this is often easier said than done. Sure, if you are a seasoned trader, and have rock-solid confidence, it is relatively easy to take a severe drawdown in stride, keep trading, and win back what you’ve lost. Novice traders don’t have it as easy. A severe drawdown may actually reflect a lack of trading skills. 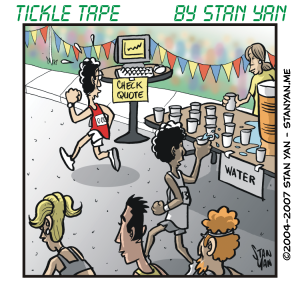 When a novice trader tells himself or herself, “I don’t have the skills to trade profitably and I should just give up,” there’s a grain of truth in it. It is hard to pick oneself up after such a severe fall because, in the back of your mind, you think your fears may be legitimate. In the end, however, such a cynical view is never going to allow you to achieve the financial success you dream about. The only way to become a serious, winning trader is to keep trading, gain extensive experience, and hone your trading skills. That isn’t going to happen if you feel stagnated and paralyzed after a setback. Fortunately, there’s a lot you can do to pick yourself up and press on.

After we’ve faced a severe setback, it’s hard not to feel extremely disappointed. Most people feel insecure to some extent, and a major letdown brings out this sense of inadequacy. The mind is wired to make this happen. Our memories are linked such that when one bad memory is triggered, others are triggered as well. It’s a vicious cycle; a failure occurs, then another failure is remembered, one’s disappointment intensifies, another failure is recalled, and the cycle continues. It is important to break the cycle before it intensifies.

There are two ways to stop the vicious cycle from turning a minor setback into a major disappointment. First, make a list of triumphs you’ve made as a trader. When you face a setback, you can read through the list and remind yourself of the times you have succeeded. This list of memories of successes will counteract your tendency to recall past failures. When you recount your past triumphs, your mood will turn from pessimism to optimism. Second, you must address the possibility that you may truly believe that you lack trading skills and can never really become a profitable trader.

Obviously, such a belief isn’t going to help you persist after a setback, but there may be some truth in it, and if you merely try to deny it and block it out of your consciousness, it may have a more powerful adverse influence on your motivation. The best way to neutralize this thought is to acknowledge it and refute it. Remember to think in terms of the big picture. You may not have adequate trading skills right now, but if you work long and hard enough, you can develop the skills you need to trade consistently and profitably. Remembering this fact will powerfully influence your ability to recover from a setback. By trading one day at a time, and making trade after trade, you can gain valuable experience with the markets, and hone your trading skills until you become a consistently profitable trader.

Don’t let a minor setback turn into a major slump. Take proactive steps to stop the downward spiral of negative thinking. Think realistically yet positively. By accepting your limitations and fighting to develop your trading skills, you can make a dramatic comeback and achieve financial success.