Jim has just taken a big risk and lost. He has been watching a stock for the past month and it’s been going down. But today an earnings report was released. Yesterday, Jim had a strong hunch that actual earnings were going to beat analysts’ estimates. In preparation for the possible price move, he bought 1,000 shares, expecting it to go up substantially after the earnings announcement. 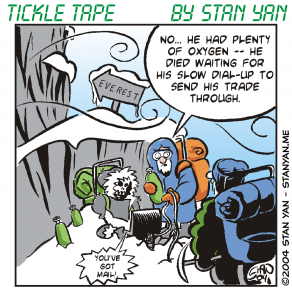 He was so sure that the stock was going to move in his favour that he didn’t use a stop-loss. Unfortunately, when the actual earnings were reported, it missed analysts’ expectations by quite a bit, and the crowd was watching. The price fell hard and fast. Jim lost a large portion of his account, and he is understandably upset. He blames fate and he blames himself. He is now experiencing a variety of intense emotions: anger, guilt, fear, and disbelief. This mix of emotions is complex, but unless Jim learns to cope with them and move on, his financial loss may also have long-term emotional consequences.

Jim blames fate and himself. He asks, “Why couldn’t events go my way? I should have been more sceptical. I shouldn’t have trusted my intuition. I shouldn’t have risked so much. I should have used a stop-loss.” Jim’s reasoning makes some sense. He feels disappointed for trusting himself and angry at external events for not going his way. He feels guilty for losing as if he has let himself down.

He wonders what he could have done to prevent the losing trade. He tries to pretend that it just didn’t happen. He thinks, “Maybe I could have risked less or prepared for the trade more. I should have studied every possible factor that was driving the price down, and accounted for them in my plan.” Jim’s feelings are a natural response to the loss. The internal dialogue that underlies his emotions is also understandable. He wants to undo this event that he views as devastating and humiliating.

How should Jim cope with these emotions? First, he needs to stand back and look at things logically. Right now, his emotions are getting the better of him. Some positive self-talk would work well right now. Sure, he risked more than he should have, but that doesn’t make him a bad person, and it wasn’t necessarily a bad idea to do what he did. There are times when traders abandon their risk limits, so taking on extra risk in and of itself isn’t a bad thing. Perhaps Jim should have thought of other factors that may influence the price or considered these factors when developing his rationale for believing that earnings would beat analysts’ forecasts.

If he had objectively looked at the evidence rather than go with an unfounded hunch, he might have faired better. That said, seasoned traders go with hunches, so doing so isn’t inappropriate. In addition, information isn’t always accurate, so even if he had studied all the available information more closely, he might not have been able to anticipate what would happen with complete certainty. In the end, Jim should ease up. He tried his best, showed courage by putting on a risky trade, and should pat himself on the back for his efforts. He may have made a few mistakes, but he is only human.

Second, he needs to decide what he has learned from the experience and do things differently next time. What should he learn? It depends on his experience. There isn’t just one right way to trade. For Jim, he may decide never to fully trust an unsubstantiated hunch again, to avoid risking more than he should consider the size of his account, or to consider the advantages of using a stop-loss.

Other traders may draw opposite conclusions, depending on their market experience. He could accept that hunches are right most of the time, but wrong at others. He could decide that risk and loss are commonplace in trading and that he shouldn’t get very upset about it. And he may decide that there is absolutely nothing he could have done and hope for the best next time. In the end, he has to decide for himself what, if anything, there is to learn. It is entirely his call. The main point is that when facing a loss, traders need to do two main things: Avoid extreme emotions through monitoring and changing self-talk and quickly decide what lessons are to be learned from the experience, if any, and just move on.

When facing a loss, it’s hard not to become consumed with guilt and anxiety. But these emotions usually get you unnecessarily upset. Rather than focusing on the next trade, you end up mulling over something that you couldn’t have changed. It’s often better to take losses in stride and move on.